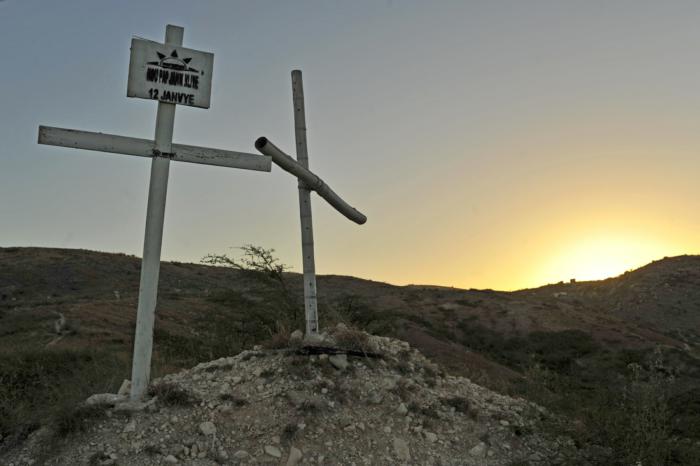 A grave is seen in Titanyin north of Port-au-Prince, Haiti, Jan. 12, the fourth anniversary of the country's devastating earthquake. To mark the disaster's fifth anniversary, the Vatican is organizing a one-day conference Jan. 10 to maintain interest in the country's reconstruction. (CNS photo/Jean Jacques Augustin, EPA)

VATICAN CITY (CNS) -- Nearly five years after a massive earthquake struck Haiti, the small Caribbean country and its people still are only limping along. In an effort to reactivate interest and commitment to reconstruction efforts there, the Vatican is organizing a one-day international conference in Rome Jan. 10.

The magnitude 7 earthquake struck Haiti Jan. 12, 2010. While the full and exact extent of the damage is not known, the Haitian government estimates 230,000 people were killed, 300,000 were injured and 2 million were displaced.

Msgr. Segundo Tejado Munoz, undersecretary of the Pontifical Council Cor Unum, said reconstruction is happening, but it is "very slow."

Cor Unum is the Vatican's office for distributing and encouraging Catholic charitable giving. Msgr. Tejado spent five days in Haiti in late November along with Cardinal Robert Sarah, the council's outgoing president. The two prelates traveled to Haiti for the inauguration of a new grade school, Notre Dame des Anges (Our Lady of the Angels), to replace one in the town of Leogane, the epicenter of the quake.

"The entire school was flattened," the monsignor said.

The new school, inaugurated Nov. 27, was fully funded by donations sent directly to the pope after the quake. The pope then transferred the donations to Cor Unum, which oversaw the construction of the school, which is run by the Companions of Jesus, a local community of Haitian religious sisters. The new school is an earthquake-resistant construction and can accommodate about 500 students.

While in Haiti, Msgr. Tejado and Cardinal Sarah also met with the Haitian bishops' conference, the administrators of Caritas Haiti, religious communities, representatives of charitable organizations, and Haitian President Michel Martelly. They attended the blessings of St. Michael the Archangel School in Morne-a-Chandelle and of the Co-Cathedral of St. John the Baptist in Miragoane. They also visited the Cathedral of St. James and St. Philip in Jacmel.

Msgr. Tejado said he saw positive changes in Haiti since he was last there in 2012, though he emphasized it was "very slow change." The capital, Port-au-Prince, was a lot cleaner with the rubble mostly removed. Some schools and homes had been built, though many more were needed. And while thousands continue to live in the temporary tent shelters provided by emergency-relief organizations immediately after the quake, more people had moved into permanent housing, he said.

He also saw a "very lively church," he said, one that was "very present and incarnate" and had become "a sign of hope" and "a social force" in Haiti.

"The church is on the front line of the reconstruction," he said.

The local bishops' conference established a technical commission to oversee and ensure that all new church building projects follow construction norms and are earthquake-resistant, he reported. Plans have been drawn up for the new seminary and cathedral in Port-au-Prince; both buildings were destroyed in the quake. However, Msgr. Tejado said, construction is on hold until funding can be secured.

Isolating and identifying the causes of the slow reconstruction is difficult, he said. The situation in Haiti is complex and the problem is systemic.

"The poverty that was there before the earthquake still exists," he said, noting the inadequate infrastructure, insufficient resources, lack of clean water, limited electricity and communications networks, and absence of local expertise. The devastation caused by the quake was simply overlaid on the nation's extreme poverty, he said.

A lingering cholera outbreak, which has sickened more than 700,000 people and caused 8,500 deaths since 2010, poses serious challenges as well.

Given the ongoing humanitarian crisis, Pope Francis expressed his desire for the solution-seeking international conference at the Vatican, Msgr. Tejado said.

Slated for Jan. 10, the conference will attempt to "reactivate interest in the work of rebuilding in Haiti," said Msgr. Tejado.

"Haiti is not forgotten," he said. "It is a church that needs to be helped."

Participants will include Catholic and international aid agencies, as well as representatives from embassies to the Holy See. It is being organized by Cor Unum and the Pontifical Commission for Latin America, along with the bishops of Haiti.