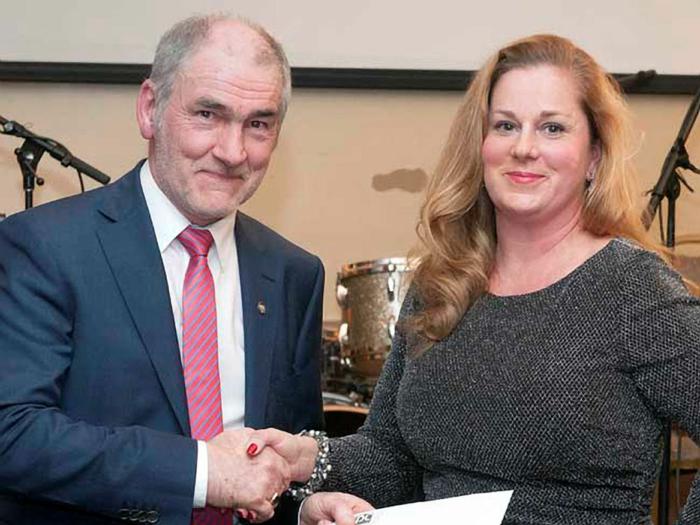 The Irish Pastoral Centre is something of a hidden jewel in the Archdiocese of Boston. But if executive director Megan Carroll has her way, that's about to change.

Carroll, who marked her one-year anniversary on the job April 15, said the IPC -- which is located at 15 Rita Road in Dorchester -- was "pretty much on autopilot" during the two years prior to her arrival, when it was without an executive director, even though it was under the strong leadership of board Chair Sheila Gleeson and the day-to-day operations were being handled by Kathleen Rohan. She said this small but dedicated staff, including chaplain Father John McCarthy and Sister Marguerite Kelly, kept it going with the help of the board of directors.

The 47-year-old Wellesley resident, a native of Illinois, said she achieved the goals that she set for her first year: getting familiar with her duties, doing some fundraising, and positioning the organization for expansion. With those accomplishments under her belt, however, she now wants to take the IPC to the next level.

"I have very lofty goals for next year," said Carroll, a graduate of Phillips Academy in Andover, as well as Boston College and Boston College Law School.

For those unfamiliar with the IPC, its primary mission, as Carroll describes it, is to "provide spiritual, social and legal services to the Irish and Irish-American community in Massachusetts." For now, that primarily means Middlesex and Suffolk counties, although she wants to expand those services throughout the state.

Other goals include the completion of an all-encompassing strategic plan, which she is currently working on with the board of directors; the addition of new board members with business expertise and connections; and the expansion of the Irish Senior Citizen Program in Dorchester and Brighton, which also celebrates monthly Masses and dancing at the Irish Cultural Centre of New England in Canton.

Still another plan, already in the works, is the prevention of substance abuse among Irish and Irish-American youths -- the latter being a population plagued by a high suicide rate among 20- to 30-year-old males.

"We're already helping older people with depression and some other related outcomes of substance-abuse problems, but we see a real need to nip it in the bud when they're younger," said Carroll. "We are taking a cultural and pastoral approach with the view that you can break from cultural drug-and-alcohol practices and look at 'your body, and others' bodies, as a sacred vessel' that should be respected and loved as God loves you. The IPC is really putting the pastoral focus in our work."

One of Carroll's favorite memories from her first year took place during the IPC's Annual Fundraising Banquet held last November at Florian Hall in Dorchester. The words offered by the guest speaker, legendary Gaelic Athletic Association manager Mickey Harte -- whose daughter was murdered during her honeymoon in 2011 -- are something that Carroll will never forget.

"He gave the most eloquent speech," she said. "He thanked God for everything in his life. Anybody in that audience was so unbelievably moved by his speech."

Carroll said "interaction with people" is the best part of her job.

"I really enjoy telling people what we do," she said, "and also going into the field and learning about the impact of the IPC."

More fundraisers are already planned, including a June 19 golf tournament at South Shore Country Club in Hingham. This year's banquet is set for Oct. 24 at Florian Hall.

Carroll added that one of the reasons she is well equipped to lead the IPC, which is primarily funded by the Irish government, is her ability to work with outside groups such as the Massachusetts-based Charitable Irish Society, the Order of Malta, and others. That talent to collaborate with and cross-pollinate the many contacts made during her law career has helped to, among other things, bring recognition and new sources of funding to the IPC. She is raising the professional bar of the organization, implementing best practices, and preparing the IPC for continued long-term financial success.

And in the end, of course, it's all about God. Carroll is a member of St. Paul Parish in Wellesley, as well as the Order of Malta.

"My Catholic upbringing has made me what I am," she said. "It's definitely a calling in this position."

More information about the IPC is available at ipcboston.org.