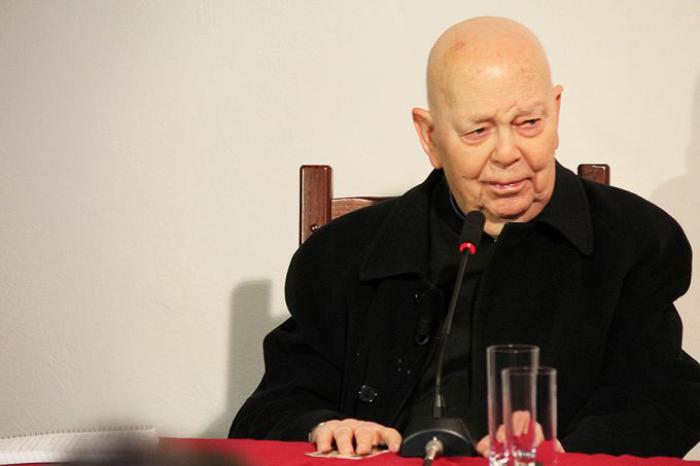 Rome, Italy, Sep 16, 2016 CNA/EWTN News.- Father Gabriel Amorth, the exorcist of the Diocese of Rome who drew worldwide attention, died on Friday at the age of 91.

Leaders of the Society of St. Paul remembered him with “great affection and gratitude,” SIR News reports.

“Now he rests from his many battles with the devil,” Spanish theologian Father Jose Antonio Fortea told CNA Sept. 16.

The priest first met Father Amorth in 1995 during theological studies about exorcisms.

“His doors were open for me and for all priests. There were no mysteries or grandstanding. I could see his work and his simplicity,” Fr. Fortea said.

“His strong, vigorous voice spoke to millions of people about the action of the devil,” he continued. “He alone, one person, managed to revitalize the ministry in one country and then his influence reached everywhere in the Church. The means to achieve this was simply to tell what he had seen.”

Father Amorth was born in Modena in northern Italy on May 1, 1925.  He entered the mother house of the Congregation of the Society of St. Paul in Alba in August 1947, five years after meeting its founder, Blessed James Alberione. He was ordained a priest on Jan. 24, 1951.

In 1985, Cardinal Ugo Poletti, the Vicar General of the Diocese of Rome, appointed him exorcist of the diocese.  He performed an estimated 70,000 exorcisms, often repeating the rite on the same persons.

Father Amorth drew much publicity for his books explaining his work and his public statements on the demonic.

“ISIS is Satan. Things first happen in the spiritual realms, then they are made concrete on this earth,” he said. He added that evil is “disguised” in various political, cultural and religious ways, with one source of inspiration in the devil.

“As a Christian I fight the beast spiritually,” Fr. Amorth said. “Biblically speaking we are in the last days and the beast is working furiously.”

In May 2013, he told CNA that Pope Francis had performed an exorcism in St. Peter’s Square on a man said to be possessed, using a prayer of liberation instead of the ordinary rite.

Some of the priest’s statements did not go unchallenged. When his memoirs were released in 2010, he claimed that there are “members of Satanic sects” in the Vatican, including priests, monsignors and cardinals. Fr. Amorth said the Pope at the time, Benedict XVI, “does what he can” against such groups.

Fr. Fortea himself questioned the claim, saying some exorcists agreed with Fr. Amorth about the Vatican sects, while others did not.

Fr. Amorth held numerous positions in the Society of St. Paul, including aspirant director, high school teacher, delegate of the Italian province, and spiritual director of various lay institutes. He was also a journalist. For many years he directed the monthly “Mother of God” and worked with the group Famiglia Cristiana and Radio Maria.

He was the author of several books and founded the International Association of Exorcists.

On Sept. 8, 2015 the Prefect of Rome, Paola Basilone, in the presence of Italy’s defense minister Roberta Pinotti, awarded Fr. Amorth the Medal of Liberation for his important role in the partisan struggle in Italy during the Second World War.

The priest had been hospitalized for several weeks for lung complications.

“His character had not changed. So close to ninety years and still doing exorcisms.”