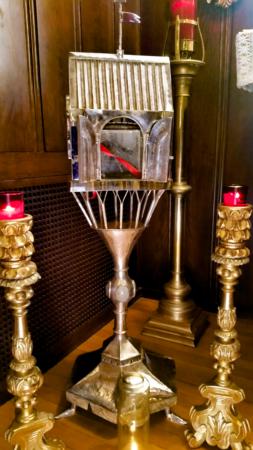 The reliquary containing the heart of St. Padre Pio is pictured Sept. 20 after being brought to Boston by Capuchin friars from the saint's shrine in San Giovanni Rotondo, Italy. Pilot photo/ Donis Tracy

The modern -- and little known -- miracles of Padre Pio

BRAINTREE -- Though there's no way to know for sure, if advance inquiries are any indication, there could be some very large crowds at Boston-area locations hosting the relic St. Padre Pio this week.

The heart of St. Padre Pio will available for veneration in the Boston area from Wednesday, Sept. 21 to Friday, Sept. 23 in the Archdiocese of Boston.

"We anticipated that there would be a good amount of interest from people in New England for this visit, but have been amazed by the number of people and groups that are planning on coming from outside of New England, as well," said Father Jonathan Gaspar, director of Divine Worship at the archdiocese and one of the organizers of the relic's visit.

"We know that there are groups traveling from New York, New Jersey and Philadelphia. We even heard from some people who are flying in from California just to be here in Boston when the relic is here," he said.

The first time any major relic of St. Padre Pio has been outside of Italy, the heart was brought to the Boston area by the Capuchin Friars who run the Shrine of St. Padre Pio in San Giovanni Rotondo, Italy Sept. 20. Boston is the only stop for the relic on this historic trip.

Amii Stewart, a singer made famous for her 1979 disco cover of the song "Knock on Wood," will be flying in from Italy to be present. Father Gaspar said she will be performing a song in honor of St. Padre Pio at the Cathedral of the Holy Cross in Boston on Thursday and Friday after the scheduled evening Masses.

He noted the song she will be singing "is popular in Italy and throughout Europe," and that she often sings at the Shrine of Padre Pio.

At some locations, volunteers from the community and members of the Knights of Columbus will also be present to help direct people and offer aid.

Cabinet Secretary for Evangelization and Discipleship Father Paul Soper, who is also one of the organizers of the trip, said Immaculate Conception Parish in Lowell in particular, the first stop for the relic on Sept. 21, has received a number of calls and inquiries.

He said that around 500 Catholic school children from across the archdiocese are planning to attend the noon Mass at the parish.

"It's an exciting way to spend their day, and to be with a lot of people who are really encouraged and moved by what this relic is and what it represents for us could be a really good thing for the schoolchildren," he said.

Father Soper said that it is fitting that the heart of St. Padre Pio that will be here for veneration, because although it was his hands and his feet that bore the stigmata, the physical suffering of Jesus, it was in his heart that he bore "the spiritual suffering of Jesus on the Cross."

"Padre Pio often described the principal experience of his stigmata was an overwhelming sense of embarrassment, and that's very connected, I think, to the suffering of Jesus on the Cross," said Father Soper.

"So, what does the heart of Padre Pio do with that spiritual pain? Well, he heard something like 5 million confessions over the course of his life. When you find yourself deeply connected with the suffering of Jesus on the Cross, he showed us what you can do with that -- you go out and forgive the world," he said.

For those who visit the relic, Father Gaspar said, the organizers hope it will become a "pilgrimage experience" for them.

"We pray that this event, taking place during the Jubilee Year of Mercy, will be one more encounter with the merciful love of our Heavenly Father, who used St. Pio as an instrument of peace and mercy in the world. As we can see from the tremendous outpouring of interest, St. Pio is still being used as the Father's instrument of mercy and healing," he said.

The most recent schedule of events surrounding the relic's visit, including the schedule celebrants of Masses is:

9 a.m.-5 p.m. at Immaculate Conception, Lowell. Veneration will be held throughout the day with Mass celebrated by Bishop Robert Hennessey at noon.

7 p.m.-midnight at St. Leonard's Church, North End of Boston. An Italian and English Mass will be celebrated at 7 p.m. by Bishop John Dooher featuring a homily by an Italian Capuchin friar, followed by veneration until midnight.

9 a.m.-5 p.m. at the Archdiocese of Boston Pastoral Center, Braintree. Veneration will be held throughout the day with Mass celebrated by Bishop Peter Uglietto at noon.

7 p.m.-midnight at The Cathedral of the Holy Cross, Boston. Spanish Mass will be celebrated at 7 p.m. by Father Kevin O'Leary, followed by veneration until midnight.