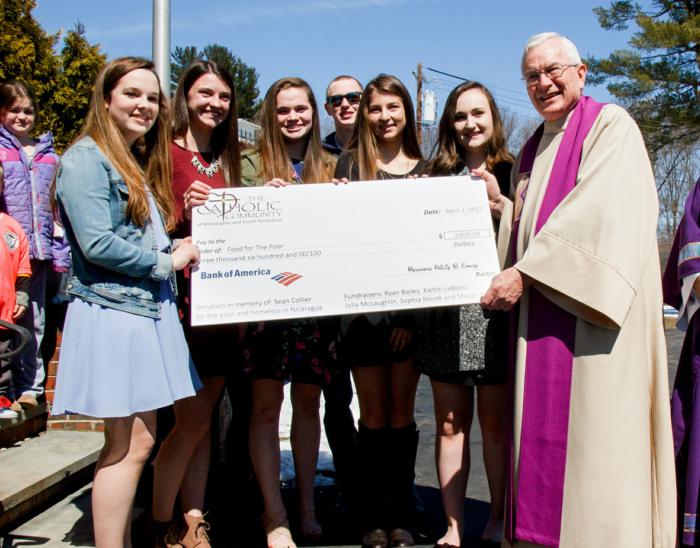 WILMINGTON -- Through the efforts of five teen parishioners of St. Thomas of Villanova Parish in Wilmington, the charitable spirit of Sean Collier, the MIT officer who was killed in the line of duty in the days following the 2013 Boston Marathon bombing, will not be forgotten.

The funds they raised were enough to build a mother and her five children in Nicaragua a new house through the organization's housing program, and while the girls' efforts went above and beyond what they were required to do, they decided to take their project one step further by dedicating the money in the memory of Sean Collier, a 2004 alumnus of Wilmington High School.

In the presence of Collier's mother and grandparents, the teens presented a check to Father Peter Lyons, a representative from Food for the Poor, following a noon Mass at St. Thomas of Villanova, April 2.

"It really means a lot because (Officer Collier) was really into doing community service, so that's why we wanted to honor him," said Novak.

"The community really helped us. It just really worked out for us because everyone's so nice," she continued.

During the Mass, which was celebrated by St. Thomas' pastor Father Phillip Earley with Father Lyons serving as the homilist, Father Lyons praised the teens' "compassion and generosity."

Their fundraising efforts have "resulted in the amazing grace of this home that has been built for this family in Nicaragua," he said in his homily, holding up a photo of the family of six standing outside their newly built house.

Through Food for the Poor's housing program, "shanty towns" in underdeveloped countries are transformed into "little villages of new homes, small houses build on concrete foundations built of cinderblock with a steel roof and indoor plumbing," he said.

It was a presentation by a representative from Food for the Poor which initially sparked the teens' interest in the organization and the work that it does, which includes providing aid to the poor in 17 Latin American and Caribbean countries.

"I think the girls did a great job and really went above and beyond," said Tracy McLaughlin, mother of Julia McLaughlin.

"They really only had to do a few hours of service, but they put this project together and kept going over two years to do more and more to reach their goal of $3,600" she said, adding they she was "very proud of them."

For Collier's mother, Kelly Rogers, the teens' efforts are serving as a way to keep Collier's charitable spirit alive.

"When Sean was here with us, he was always trying to help other people. He did a lot of charity work," including working with children at a boxing club in Somerville, said Rogers. She added that shortly before his death, he had also asked the chief of his police station if he could join the board of a local homeless shelter.

"This was all the stuff that was very, very important to him. So, this is a way to kind of keep his legacy going," she said.

"We were amazed that these young girls, for a couple years, were collecting money and kept this going. We really didn't know about it until a few months ago," Rogers continued. "They're great kids."