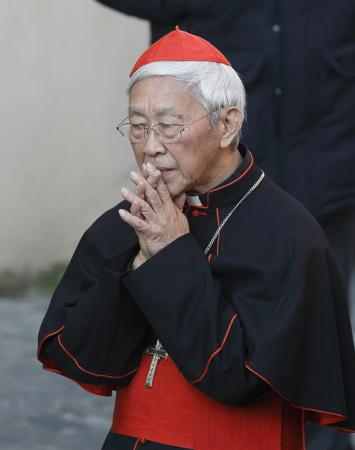 SOUTH BOSTON -- At 85, said Cardinal Joseph Zen, the bishop emeritus of Hong Kong, "I do two things only: talking and rest, rest and talking." He laughed.

It has been several years since the cardinal last visited Boston, but he seemed at home sitting at a meeting table in St. James the Greater Church, Sept. 25, drinking hot tea that parochial vicar Father Peter Shen had just prepared.

Much has changed since he was last in the area: a new pope was elected, as was a new U.S. president. Cultural trends have come and gone, and some of the social norms have shifted. Yet, despite the changes, the cardinal's message was the same: the need for reform in the Catholic Church in China.

"It's in a very dangerous situation. I think I am in the unique position to have a say on that because of my experience, my opportunity to know very well China, to know very well the Holy See," said Cardinal Zen.

Born in Shanghai, Cardinal Zen fled to Hong Kong at a young age to escape communist rule. He became a priest, and began teaching at an institute in Hong Kong, as well as in seminaries in China. He became Bishop of Hong Kong in 2002 and was elevated to cardinal by Pope Benedict in 2006. He served in Hong Kong until his retirement in 2009.

For the last several years, Cardinal Zen has spent a great deal of time traveling across the globe, speaking out about the Catholic Church in China.

Since the creation of the People's Republic of China by communist leader Mao Zedong in 1949, religion has been feared, and discouraged, by the government. While the communist leadership cannot force beliefs on Chinese citizens, it does its best to promote atheism. Officially, and unofficially, priests clergy from a number of different religions have been expelled or detained over the last several decades, and since 1951, the Holy See has not maintained an official relationship with China.

But that doesn't mean Catholicism doesn't exist in China; it does, but, at least on the surface, it mainly exists as the Chinese Catholic Patriotic Association (CCPA), an organization created and run by the government. Unrecognized by the Holy See and the only government-sanctioned Catholic organization in China, the CCPA shuns papal authority. Historically, it has elected its own bishops, often without Vatican approval.

Recently, however, rumors have been floating of a proposed agreement that would potentially give legitimacy to CCPA bishops not approved by the Holy See. Nothing has been officially announced, and even Cardinal Zen didn't seem to have all the details on the potential agreement, a fact that troubled him.

As one of only two living Chinese cardinals, he believes he should be included in any talks between the Holy See and China. That he's not, is a "very bad sign," he said.

From pieces of information that he has heard, he said an agreement has likely been drawn up, although he doubts if it has been signed yet. He hopes it won't be signed.

"I'm disappointed because (the Holy See) seem(s) to be too optimistic in these talks," he said.

Right now, the cardinal said, the Chinese government isn't looking to negotiate. Instead, it "just wants a total surrender," on the part of the Church, something he wonders if Pope Francis and other Church leaders are aware of or are taking seriously.

There are many demands that the Chinese government is making of the Holy See, he continued, and "those demands are too much."

"For example, they are demanding that the pope approve the seven illegitimate bishops," he said, referring to seven CCPA bishops that were ordained without Vatican approval. Three of those seven bishops have been formally excommunicated, he said, "and it seems that two of them have a wife and children, so they cannot be recognized as bishops."

According to Cardinal Zen, China is also unwilling to negotiate on "underground Catholics," or those Catholics who follow the Church in Rome, rather than the CCPA.

The Holy See is "afraid of supporting the underground Church, because they are afraid of offending, irritating, the Chinese government," said the cardinal.

Catholics who remain in the underground Church can be subjected to persecution by the Chinese government.

Without the support of the Holy See, it may be difficult for the underground Church to remain, as "many dioceses underground don't have bishops, because they die and they are not given new bishops," said Cardinal Zen.

In some cases, said the cardinal, the Holy See isn't even allowed to mention aspects of the underground Church in discussions with China.

"Now, the Vatican is making themselves prisoners. If they surrender at the beginning, how can they negotiate?" he asked.

While he believes in supporting and fighting for the underground Church, the cardinal admitted he doesn't believe "the majority of the faithful who go into church simply don't even understand the distinction between the underground and the official Church" in China.

For the average Chinese parishioner, then, "they may simply be happy to see the church is open, to pray, to sing."

Spreading the message is important, although Cardinal Zen said he feels that he is "the lonely voice."

"Humbly, I think I'm like Jeremiah the prophet. I am not the hero, but I'm forced to be the voice in the wilderness," he said.

Still, at 85, and after a period of illness last year, the cardinal thinks this may be his last trip to North America. He spent a large part of the summer in the U.S. and Canada, traveling to different states to speak with those who would listen.

Boston was one of his last stops, and while he was only in the city for a few short days, he made time to meet with Cardinal Seán P. O'Malley to discuss the Church in China, and celebrated Mass and gave a talk at St. James the Greater Church, a center of the Chinese Catholic community in Boston.

He noted Boston's hospitality. "We Chinese people, we are grateful for your welcome of our brothers and sisters and now they can live here, live their faith also in peace," he said.