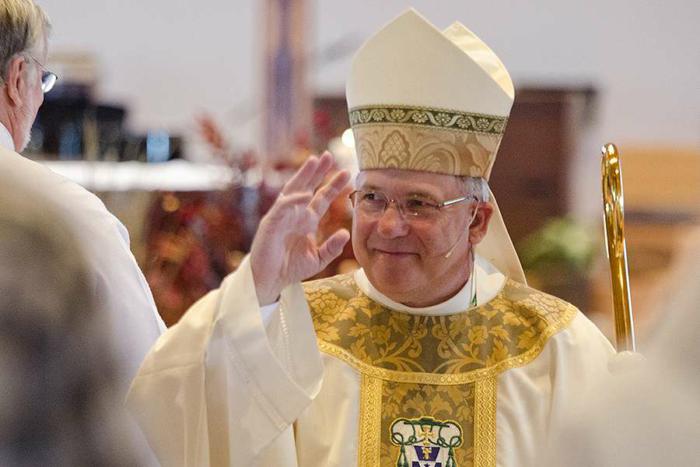 Bishop Joseph Cistone Courtesy of the Diocese of Saginaw 2 CNA

Saginaw, Mich., Mar 22, 2018 CNA/EWTN News.- On Thursday, police in Saginaw, Michigan raided the home of Bishop Joseph Cistone, as well as the diocesan chancery and its cathedral rectory, as part of an ongoing investigation into sex abuse allegations against several diocesan priests.

CNA has reached out to the Diocese of Saginaw, Michigan for comment but did not receive a response by press time.

Police told local media that they could not reveal what they were searching for or taking from the properties. However, authorities did say that the search warrants were due to a lack of cooperation on the part of the diocese related to an ongoing clerical sex abuse investigation.

"Contrary to the statements of the diocese and the bishop that they would fully cooperate with law enforcement, they did not," Saginaw County Assistant Prosecutor Mark Gaertner told local news source Michigan Live. "Therefore it was necessary for law enforcement to use other investigative tools, including search warrants."

Gaertner told Michigan Live that search warrants were executed on Thursday at Bishop Cistone’s home as well as on the rectory of the diocesan cathedral and on the diocesan offices.

Two priests have been placed on leave from their duties after a recent wave of accusations of sexual abuse against priests in the diocese.

DeLand, who also served as judicial vicar for the Diocese of Saginaw, was placed on administrative leave during the investigation. He was also banned from school properties and from presenting himself as a priest.

In February, Bishop Cistone said in a statement that he had “no previous knowledge of the police investigation or of these allegations” against DeLand, and that “the diocese will cooperate fully with law enforcement and their investigation.”

On March 8, the diocese released a statement clarifying that further review of records determined that the diocese had been informed of rumors about DeLand in 1992, and that in 2005, a woman contacted the diocese about the possibility that DeLand might have sexually abused her brother, who since had died, in the 1970s. The diocese said it had contracted an investigator to assess the matter, and that “the independent Diocesan Review Board, Bishop Robert Carlson, who was Bishop of Saginaw at the time, as well as the family agreed that the suspicion against Father DeLand was unfounded.”

Police have told local news sources that they have received numerous tips against other clergy following the arrest of DeLand in February.

The second priest to be placed on leave in the recent investigation is Father Ronald J. Dombrowski, following an accusation that he sexually assaulted a minor. According to the diocese, the alleged victim first brought the complaint to the diocese, which contacted the authorities.

While Dombrowsi, 72, has not been criminally charged, he has also been banned from school properties and from presenting himself as a priest during the investigation. He most recently served as sacramental minister at Holy Family Parish in Saginaw and received “senior priest” status in 2013.

In 2012, Cistone was accused of misleading a grand jury about his compliance in the destruction of documents containing the names of priests suspected of child molestation in 1994, while he was serving as a priest in the Archdiocese of Philadelphia. Cistone was not criminally charged in the incident.

In February, Cistone announced that he had been diagnosed with lung cancer.