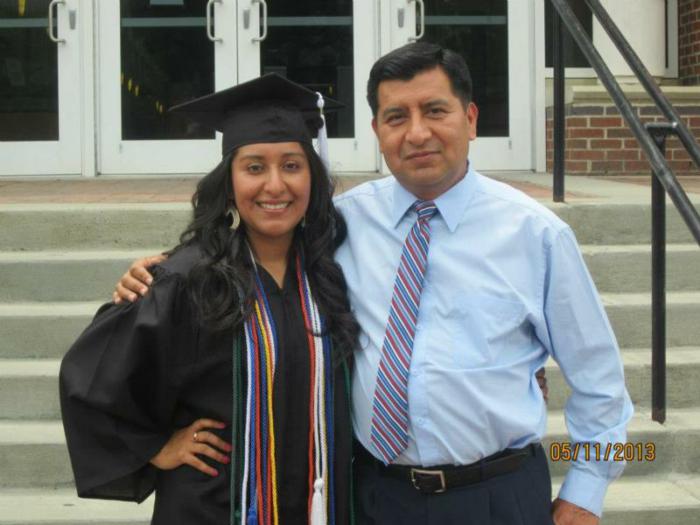 Belsy Garcia poses for a photo with her father, Felix Garcia, after graduating in 2013 from Mercer University in Macon, Ga. Catholic groups are helping the 27-year-old medical student as she fights to stop father's deportation. (CNS photo/courtesy Belsy Garcia)

WASHINGTON (CNS) -- While many of her peers will be catching up on sleep or heading to warmer climates during spring break, 27-year-old medical school student Belsy Garcia Manrique will be heading to a detention center in Georgia to visit her father and to fight for his release.

In January, Felix Garcia, 51, was taken into custody while doing a regular immigration check-in with authorities in Georgia. He had been routinely attending the meetings since 2009 when U.S. Immigration and Customs Enforcement showed up at his workplace and detained undocumented workers. Since he didn't have a criminal record, he was not a high priority for deportation as long he checked in.

But on Jan. 23, Belsy Garcia said, she received a text message from her father: "They're going to detain me. Keep going. I know you can do it."

"It was heartbreaking, not knowing when I was going to see my father again," said Garcia in a March 22 telephone interview with Catholic News Service.

With just a year to finish medical school in Chicago, Garcia faces a predicament of her own since she, too, is facing an uncertain future as a beneficiary of the Deferred Action for Childhood Arrivals program, whose end President Donald Trump announced in September. He charged Congress with passing a measure to keep DACA in place, which so far it has failed to do.

If her father is deported to Guatemala, she is unlikely to see him because she fears that leaving the U.S. may mean not she will not be able to return just as she gets closer to her professional dream.

Garcia is studying to become a doctor at Loyola University Chicago's Stritch School of Medicine, a decision that she says was influenced by her father, who encouraged her to do something with her life that would help underserved communities.

Seeing her father interpret for others, making the effort to find work for others when they needed it, shaped the way she lives her life, she said. Though she didn't have proper legal documents to be in the United States, he taught her that she could still be a contributing member to American society, she said.

"He made us volunteer and he was always about us doing well in school," she said, even as the family faced an unsure future because of their irregular immigration status.

With help from groups such as the Ignatian Solidarity Network, Belsy Garcia has been trying to get the attention of Sean Gallagher, director of the Atlanta Field Office for ICE, getting others to sign a petition to free her father.

It's been financially hard for her family, she said, because he was the breadwinner. Part of her spring break includes seeing what finances can be pared down and how to recover from losing his salary. But it's been harder emotionally. The family can only see him through a glass and even behind that barrier, he has continued to encourage his daughters to keep their spirits up and their goals in focus.

For Belsy Garcia, that means pushing through with the work she needs to finish her medical degree so she can graduate in the spring of 2019 and then serve the poor in the Calhoun, Georgia community, a place that's been home to her family for more than 20 years.

"Without my dad's drive and passion and set of values that he taught me, I wouldn't be where I am today," she said.

Her father, a "jack-of-all-trades," put down roots in Calhoun, Georgia, after problems erupted in his native Guatemala in the 1990s, she said. Though her father came seeking asylum, he didn't have an attorney and Felix took his chances working all kinds of jobs to support his daughters. He's done accounting work, construction, even had a small business selling tortillas, she said.

"This is his home, where he has put down roots," she said. "If he could, he would do whatever, he'd be willing to fight and go to war for the United States. ... He sees this as his home."

She admits that it's been a difficult few weeks trying to focus on work, talking to lawyers, groups, trying to find a way to stop the deportation, which could come in early April.

"It's been extremely hard. It's hard to focus on your studies when your dad is in a detention center," she said in between tears. "I feel helpless ... it's a lot of emotions."

Going to work, doing clinical rotations and seeing patients "takes my mind off of things," she said.

Though DACA changed her life -- she was able to work, drive and volunteer at places she'd previously had to skip because they asked for a Social Security number -- most people don't realize the complexity of how immigration policy can affect one family.

In her family's case, even if politicians find a solution for those like her, who were brought into the country without legal documentation as minors, "what about my father?" she asked.

"I could fix my status but what about my father?" she said. "It's a personal problem and an issue in my life."

Though the adults who brought them to the U.S. are often painted in a bad light, the only thing they're guilty of is trying to provide a better life for their family, she said, and that's why she's fighting to free her father.

"He wanted us to take advantage of the opportunities he didn't get," she said.

In his absence, she's trying to maintain his optimism and help her 19-year-old sister with the uncertainty of the moment.

"It causes an extreme amount of stress and emotional toll on my youngest sister," she said. "What can you say that will make her feel better? There is absolute nothing I could tell her, other than that at least he is healthy and hopefully we'll get to see him in the future. ... How can I console her? It's difficult to stay strong especially because my dad has been foundation for us and now he's being taken away from us."