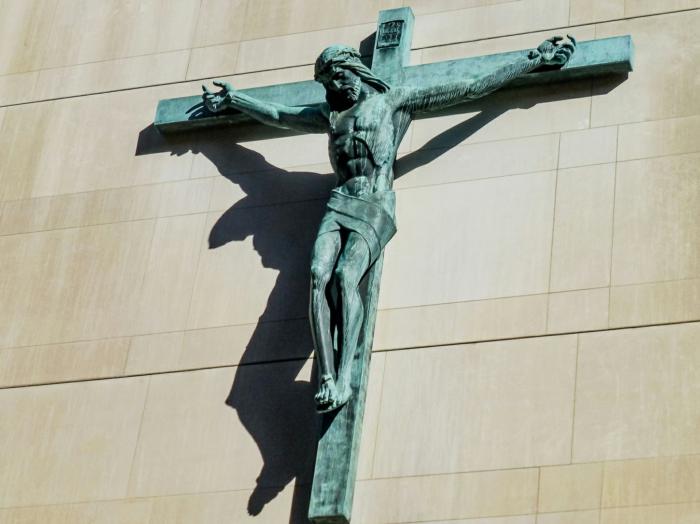 The crucifix on the facade of St. Anthony Shrine in Downtown Boston. The shrine, along with Our Lady of Good Voyage Shrine in the Seaport District, will host liturgies of "resilience, recovery, and remembrance" for individuals and families impacted by addiction during the summer months. CC BY 2.0/ Jim McIntosh via Wikimedia Commons

BRAINTREE -- In a collaborative effort to address addiction in the Commonwealth, St. Anthony Shrine and the Archdiocese of Boston are holding summer liturgies of ''resilience, recovery, and remembrance'' for individuals and families impacted by addiction.

At four Saturday evening liturgies, two to be held at St. Anthony Shrine on Arch Street and two to be held at the archdiocese's Shrine of Our Lady of Good Voyage in the Seaport district, those whose lives have been effected by addiction will be able to connect in a spiritual and supportive way, said Anthony Andreottola, director of St. Anthony Shrine's Father Mychal Judge Center for Recovery.

The liturgies will serve as an "experiment in bringing people together" and offering them support, he told The Pilot May 30. "We want to get people in the door, we want to start conversations."

In some ways, organizing the liturgies was in itself an experiment in bringing different groups together. The result of numerous discussions, the planned services are a collaborative effort of the Father Mychal Judge Center for Recovery, the Archdiocesan Addiction Recovery Pastoral Support Services (AARPSS), and the South Boston-Seaport Catholic Collaborative.

Deacon Paul Kline of the South Boston-Seaport Catholic Collaborative told The Pilot May 30 that a year ago he and Andreottola "initiated a spirituality support group for women and men in recovery seeking a deeper conversation about spirituality than traditional 12 step meetings are able to provide."

That group proved to be successful, and "our experiences with those meetings are what have led to this summer liturgy series," Deacon Kline explained.

The Father Mychal Judge Center, which offers free support to anyone suffering from addiciton, and Father Joe White of AARPSS have both been "vital sources of support and expert advice as we have sought to strengthen our ministry to those impacted by addiction in South Boston," said Deacon Kline.

The liturgies will be open to all, "including people in recovery from addiction, family members and friends, and those grieving the loss of someone who has died from addiction," said Deacon Kline. "Even if your life has not been touched by addiction, your prayerful and supportive presence will help build a community of authentic compassion and hospitality for others."

"As privileged companions to people in recovery and their family and friends, we often hear a deep longing for God's presence and God's peace. We also hear the pain that comes from feeling isolated from the larger community due to shame and stigma," he said.

"We hope that these liturgies will respond to that longing for God and build a bridge back to a community of faith," the deacon continued.

If all goes well, Andreottola said, the series will "most definitely" be held again next year, and possibly become an annual event.