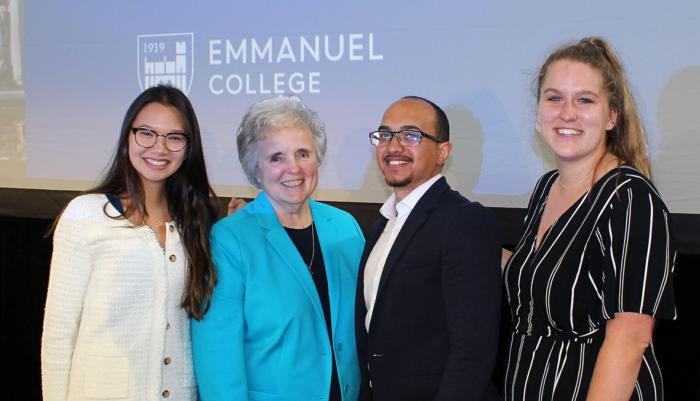 More than 200 professionals engaged in the educational and healthcare ministries of the Sisters of Notre Dame de Namur around the globe gathered on Emmanuel College's Fenway campus from July 25-July 28 for Networking for Mission III. Attendees from 10 countries -- including Belgium, Italy, Japan, Kenya, Nigeria, Peru, South Africa, DR Congo and the United Kingdom -- and a dozen states across the U.S. participated in a series of vibrant discussions and interactive workshops focusing on the SNDdeN mission in the 21st century.

Emmanuel College President Sister Janet Eisner, SNDdeN, delivered the opening keynote, "Vision Made Manifest: Transforming Lives through Catholic Education and Healthcare." In her talk, Sister Janet spoke of SNDdeN founder St. Julie Billiart as a visionary -- and of Emmanuel College as just one manifestation of Julie's vision of education as the foundation of so many goods for individuals and for society.

"As we prepare to celebrate Emmanuel's Centennial in 2019, we are focusing in a special way on our SND heritage, and on how our mission has flourished -- often in unexpected ways and certainly with profound effects on our students," Sister Janet said.

Emmanuel opened in 1919 as the first Catholic liberal arts and sciences college for women in New England, before women had the right to vote. The aim of the sisters who founded Emmanuel was to equip women to succeed in a range of professions and make significant contributions to the Church, their families and communities. In the decades that followed, through the Great Depression and World War II, graduates of Emmanuel became trailblazers in law and the sciences, and the campus flourished from a commuter college to a residential one. Later, to weather shifts in the higher education landscape, the college leveraged its location in the Longwood Medical and Academic Area and launched degree completion programs for working nursing professionals. Then in 2000, the college transitioned to coeducation and entered into a ground lease with Merck Research Laboratories-Boston on a parcel of Emmanuel's land. Sister Janet credited the arrangement as "one of several factors that have allowed for the transformation of Emmanuel's endowment, enrollment and programs," as well as physical changes to the campus.

"If there is a single lesson coming out of the experience of the last two decades, it is this: 'Don't resist change. Rather, reinvent, work with others and affirm the mission,'" she said.

Today, on the cusp of the 100th anniversary of its founding, the college is thriving. This fall, Emmanuel will welcome more than 620 new first-year students, open a brand new, 18-story, apartment-style residence hall, reorganize its academic programs into five distinct schools and launch innovative academic programs in rising fields.

Emmanuel students entering their senior year Sarah Nickles, Jaxell Negron and Jessie Wang also spoke of how their time at Emmanuel has transformed their academic and career trajectories through significant and meaningful community service, internship and leadership opportunities.

Father J. Bryan Hehir, secretary of health and social services for the Archdiocese of Boston and distinguished professor at the Harvard Kennedy School; Sister Mary Johnson, SNDdeN, co-director of the Billiart Center for Social Justice and distinguished professor of sociology at Trinity Washington University; and Sister Simone Campbell, SSS, executive director of NETWORK and author of "A Nun on the Bus," also delivered keynote addresses.

Sisters, as well as lay administrators, faculty and staff from SNDdeN schools, delivered nearly 40 workshops over the four-day conference, on a wide range of topics such as technology and social media, curriculum and instructional practices, ethics and healthcare, women in leadership, culturally responsive education, global citizenship, nonviolent conflict resolution and more.