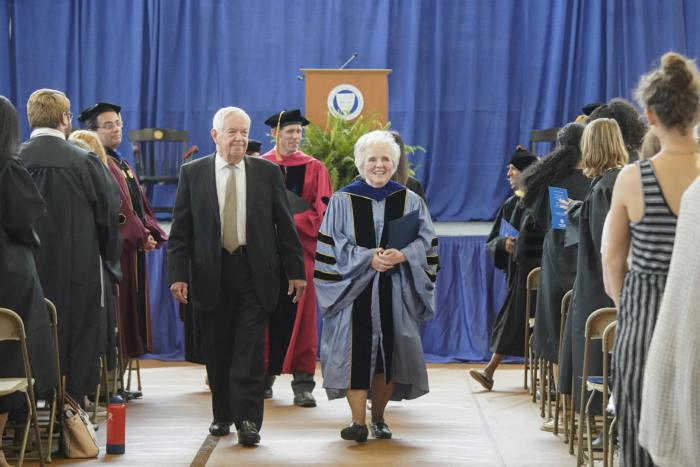 Emmanuel College marked the opening of its 99th academic year Sept. 11, with the celebration of its Academic Convocation. Entrepreneur, philanthropist, and author Bill Cummings, well known in the greater Boston community and beyond for his success in business and real estate and his commitment to philanthropy, delivered the keynote address.

"We remain steadfast to our commitment to look forward and work toward a more just and peaceful world," Sister Janet said.

Sister Janet asked the Class of 2019, dressed in academic regalia, to stand, and noted that, as the college is on the eve of its centennial, they will be the first class to graduate in Emmanuel's second century.

"You stand at a crossroads where knowledge meets know-how, faith meets reason, and research meets scholarship," Sister Janet said. "You will affirm the enduring value and limitless potential of an Emmanuel education."

Sister Janet then introduced Cummings, who began his address by speaking directly to the Class of 2019.

"Emmanuel College, far more than you realize now, will be your friend for a lifetime," Cummings said.

He offered a piece of advice from his father that he has carried with him all his life: "No matter what profession you go into, give it the best you can, and take advantage of the opportunity. Learning does not end at graduation."

During his address, Cummings's told many anecdotes from his entrepreneurial odyssey -- beginning as early as age six -- and brought to life many sections of his new autobiography, ''Starting Small and Making it Big: An Entrepreneur's Journey to Billion-Dollar Philanthropist," which was required reading for Emmanuel's incoming first-year students.

The autobiography spans the seven decades of Cummings's journey in business and philanthropy, sharing not only the pioneering thinking that produced a multibillion-dollar enterprise, but highlighting his singular dedication to the communities and institutions that were so vital to his success.

Cummings founded the commercial real-estate firm Cummings Properties in 1970, which has grown from one small building to an 11-million-square-foot portfolio of more than 100 modern buildings.

Reflecting on his many successful years in commercial real estate, Cummings said that he and his wife Joyce came to believe that "no one can truly own anything." They believed that, given their "ever-so-brief stay upon this earth," they could not think of themselves as owning land; rather, they were caretakers of the ground that lay beneath. Cummings said that as he came to terms with this philosophy, "it was easy then to start thinking of philanthropy going forward."

Bill and Joyce Cummings have generously contributed much of their wealth to numerous causes through the Cummings Foundation, which they established in 1986. To-date, the foundation has awarded more than $220 million in grants to greater Boston nonprofits alone, including more than $1 million to Catholic Charities and $600,000 to St. Anthony Shrine.

The Cummings were the first Massachusetts couple to join the Giving Pledge, an international philanthropic organization founded by Bill and Melinda Gates and Warren Buffett. It was through the Giving Pledge that Cummings learned much about philanthropy as well as gained awareness about the many areas in which such funding can be especially beneficial.

"Warren Buffett, in particular, was a helpful sounding board for me as I struggled with being engaged simultaneously in the seemingly contradictory activities of making money and giving it away -- intelligently," Cummings said. "No one needs to look hard to see the urgent needs in our own community and throughout the world that will benefit from our financial support."

Through the Giving Pledge, Cummings began to pursue philanthropic opportunities in Rwanda, where he first traveled in 2012 and visited three different hospitals operated by Boston-based organization Partners in Health. With the goal of improving health outcomes not just in Rwanda but throughout Africa, Cummings Foundation funded $15 million toward an international multidisciplinary medical university in Rwanda, University of Global Health Equity (UGHE). The different disciplines at UGHE are organized to have the same foundation of healthcare knowledge and students are trained not only in their respective discipline but also in the delivery of healthcare at large, thus enabling the spread of basic care widely to better reach areas in desperate need.

"There are no lives that are not worth saving, yet there are still so many millions of preventable deaths each year," Cummings said. "In many remote areas of the world with appalling disparities, even the most basic of medical services will make enormous life-and-death differences."

Though the Foundation has operated primarily in greater Boston and continues working with local nonprofits, they are grateful to have had the opportunity to affect areas beyond Boston, heighten their awareness, and recognize immense needs on a global scale. Doing so has already proved hugely effective in just a few years, especially as UGHE graduated its first class of master's degree recipients in May 2017.

"There's no reason for any of us to try to change who we are just because we've become good -- or lucky -- at whatever we do in life," Cummings said. "Any and all talents we have we are given, and what we do with these talents tells the most about who we are."

In closing, Cummings, citing an excerpt from his book, urged students to go forth and focus on making a difference in their communities and the world beyond.

"Let me ask all of you to be the force that helps to build bridges, especially for our marginalized neighbors. So much more than bridges over rivers and highways, build bridges of love, bridges of hope, and bridges of understanding. Let there be bridges of opportunity, too. Let bridges such as these take us all where we otherwise could not go."