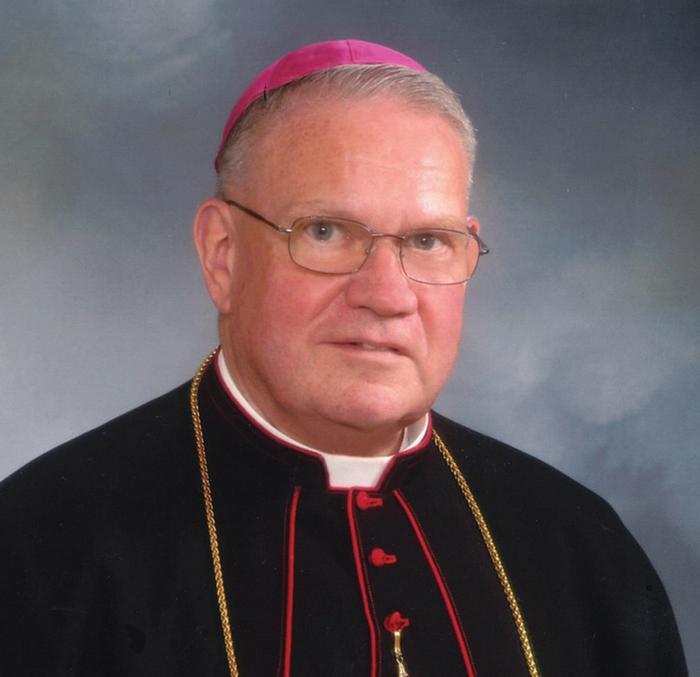 Bishop Walter James Edyvean, titular bishop of Aeliae and former auxiliary bishop of the archdiocese, died at Metrowest Medical Center, Natick on Feb. 2, 2019. His death at the age of 80 was unexpected.

An only child, he was born in Medford on Oct. 18, 1938, the son of the late Walter J. and Frances (Reardon) Edyvean. Raised in St. Joseph Parish, he attended local public schools and on graduation from Medford High School in 1956 he was enrolled at Boston College. At the time, BC was a commuter school and Walter would have made the trek to Chestnut Hill and back to Medford on a regular probably daily basis. He was graduated in 1960 with a bachelor of arts degree in English.

Quiet and reserved, he was without doubt a gentleman. If asked about the family name he proudly announced that it was Cornish. His roots would have been in the westernmost toe of the British boot -- Cornwall; he cautioned the other Celts (vastly Irish) in the seminary that the Cornish were Celtic as well.

The next fall, Walter was enrolled at St. John Seminary as a member of the class of 1965; and the next fall he was across the Atlantic as a student resident at the Pontifical North American College and enrolled at the Pontifical Gregorian University for his theological studies. Three other Boston classmates were ordained with the Class of 1965 on Dec. 16, 1964, at the Chapel of the North American College by the seminary's rector Bishop Francis Reh. A long standing custom was that the North American students were ordained the December of their fourth year of theology. While Bishop Reh ordained him, most of his seminary formation had been under the direction of the legendary "second founder" of the college, Bishop Martin J. O'Connor. Msgr. Stephen M. DiGiovanni of Bridgeport, an author a biography of Bishop O'Connor and a history of the recent years of the college, said that "Walter was invaluable for his personal recollections and detailed information about the legendary rector and the college."

His last years at the college coincided with the preparations and opening of the Second Vatican Council. He was much influenced by Pope St. Paul VI. He reminded seminarians frequently of the greatness of the sometimes overlooked, but as Walter would have agreed with one of the pope's biographers -- the first modern pope.

When he returned home to the archdiocese in the summer of 1965, he was assigned to what would be his only parish assignment -- St. Joseph in Ipswich. There he came under the influence of the parish's pastor -- Father William Melea. They remained fast friends and although he was only there for about three years he also had treasured friendships among the parishioners. While at Ipswich he was also a visiting professor at Emmanuel College in Boston, teaching theology and Church history.

He returned to the Eternal City, which was very much for him a second home, to complete doctoral studies, again at the Pontifical Gregorian University. His field was dogmatic theology and on completion of his doctoral studies he was granted the STD from the "Greg" in 1972.

Assigned to the faculty of St. John Seminary, he would teach sacramental theology for the next 19 years. Seminary students would recall his genuine kindness to them as well as his personal concern. He taught required courses in Sacramental Theology; Baptism and Confirmation and Orders and Eucharist.

Many will remember he slipped in sound, practical advice for his students. "Gentlemen: the simple phone call to the parish requesting the baptism of a child is all you need to have as sufficient "spes fundata" (founded hope) for the child's Catholic upbringing. In other words: don't be tough on the people. He followed up with the further advice "you should meet with the families and if there are any issues to be dealt with that's more for you to do. And, do not delay the baptism once they've called."

That he was not a fortune teller nor infallible were proven by the confirmation course material. "We'll dedicate three days to it; the Marsh (an Irish theologian) articles will be sufficient. Nobody here will be celebrating confirmation." Bishops Robert Hennessey and Peter Uglietto both heard that in class. Many former students reminded Walter of this quote when he arrived to celebrate the sacrament in one of the archdiocesan parishes years later.

Following his almost two decades on the seminary faculty, in 1990 he was appointed to the staff of the Holy See's Congregation of Catholic Education. Two years into that assignment, he was made head of the section dealing with Catholic Universities and Ecclesiastical Faculties. He was, as most American priests working for the Holy See, residing at the Villa Stritch of which he served as director for a number of years. Pope St. John Paul II named him a member of the papal household as a prelate of honor with the title of reverend monsignor on Jan. 17, 1992.

On June 29, 2001, Bernard Cardinal Law announced the Pope St. John Paul II had named two priests of the archdiocese as auxiliary bishops -- Walter James Edyvean and Richard Gerard Lennon; Bishop-elect Edyvean was called back to Boston from Rome while Bishop Lennon was serving as rector of St. John Seminary. At the time of the announcement, it was noted that it was an unusual circumstance: a former seminary professor (Edyvean) and one of his former students (Lennon) would be ordained bishops together.

The episcopal twins were ordained at the Cathedral of the Holy Cross on Sept. 14, 2001, by Cardinal Law assisted by Bishop William Murphy, by then the fourth bishop of Rockville Centre, N.Y. and Auxiliary Bishop Emeritus Lawrence J. Riley.

Bishop Edyvean would serve as the archbishop's second in command, as vicar general and moderator of the curia; while Bishop Lennon would remain as rector of the seminary and assume additional responsibility as regional bishop of the West Region of the archdiocese.

At the time of his episcopal ordination, he assumed both a coat of arms and a motto. Bishop Edyvean chose a line from the martyr bishop of Carthage, St. Cyprian: "Christi nihil praeponere" -- prefer nothing to Christ.

During the next few years, he served quietly and steadily as the cardinal's right hand man, overseeing the day to day operations of the central administration of the archdiocese; serving on boards, committees and commissions, attending meetings in Brighton and elsewhere; and also serving on committees of the United States Conference of Catholic Bishops. He was especially pleased to serve on the committee, which was also the board of directors of his alma mater, the Pontifical North American College.

In December 2002, with the resignation of Cardinal Bernard Law and the appointment of Bishop Lennon as the apostolic administrator of the archdiocese, Bishop Edyvean remained on board to assist his former student in the governance of the archdiocese in a most trying time.

Following the installation of Archbishop Seán P. O'Malley as the archbishop in July 2003, Bishop Lennon was named vicar general and moderator of the curia, and Bishop Edyvean named bishop of the West Region where he served until his retirement as auxiliary bishop on June 29, 2014 -- the 13th anniversary of his appointment as bishop.

During those years as regional bishop, he celebrated confirmations in the West Region and across the archdiocese; visited parishes, schools and other institutions of the region; established an annual day to celebrate the women religious of the region. He also continued to serve on various boards, commissions, and committees -- though fewer than when he was vicar general.

Although he retired in 2014, he remained active in the archdiocese celebrating confirmations; serving on presbyteral council, board of consultors and anything he was asked to do.

The surprise of the bishop's death was still settling in. Bishop O'Connell said "he taught me much about being a gentleman and a bishop"; Bishop Hennessey said "Walter was always helpful when I needed a quick answer about what to wear on what occasion. And he was also ready to explain the how's and why's."

Bishop Edyvean's Funeral Mass to be celebrated at St. Patrick Church, Natick (he had lived residence in the rectory for many years during his tenure as West Regional bishop and following his retirement) on Feb. 8, 2019. Seán Cardinal O'Malley (who was with Bishop Edyvean at his death) was to be the principal celebrant and Father Stephen Linehan, of the faculty of Pope St. John XXIII Seminary himself a one-time student at St. John Seminary of the then Father Edyvean, was to be the homilist. Following the Funeral Mass Bishop Edyvean was to be buried with his parents in Oak Grove Cemetery in his hometown of Medford.

(Ed. -- Next week's issue of The Pilot will provide coverage of Bishop Edyvean's Funeral Mass.]