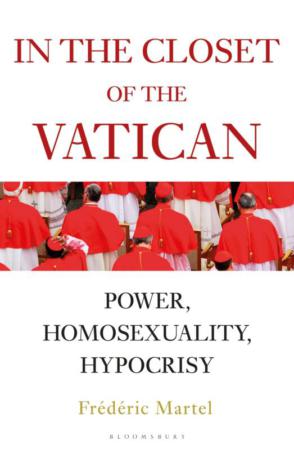 This is the cover of "In the Closet of the Vatican: Power, Homosexuality, Hypocrisy," by French author and journalist Frederic Martel. The new book accused the Vatican of hypocrisy, claiming that the majority of prelates working within its walls live active homosexual lifestyles. (CNS photo/courtesy Bloomsbury Publishing)

VATICAN CITY (CNS) -- A new book accused the Vatican of hypocrisy, claiming that the majority of prelates working within its walls live active homosexual lifestyles.

The book, titled "In the Closet of the Vatican: Power, Homosexuality, Hypocrisy," by French author and journalist Frederic Martel, was scheduled for publication in eight languages Feb. 21, the same day leaders of the world's bishops' conference convened in Rome to reflect on the abuse crisis that has rocked the Catholic Church.

The author, who is openly gay, said he spent four years of "authoritative research" interviewing current and former Vatican officials, including priests, bishops and cardinals.

He also claimed that Pope Francis' homilies on those in the church who lead "double lives" refer to "the dizzying hypocrisy of those who advocate a rigid morality while at the same time having a companion, affairs and sometimes escorts."

Among Martel's sources is Italian journalist Francesco Lepore, a former priest who, according to the Annuario Pontificio -- the Vatican yearbook -- served as one of several secretaries at the Vatican Apostolic Library in 2006.

Speaking to Lepore about his experiences and the alleged sordid details of the secret lives of various prelates, Martel asked him to estimate what percentage of Vatican officials were gay.

"I think the percentage is very high. I'd put it at around 80 percent," Lepore told the author.

While Martel claimed to interview several cardinals and bishops, those who spoke frankly about their own homosexual orientations chose to remain anonymous.

The book, which often recounts salacious details of the sexual activity of prelates or musings on their lifestyles, offers little concrete evidence outside of testimony from unnamed sources. However, Martel said a 300-page document that includes sources, notes and unpublished chapters would be made available online on the book's publication day.

Until his death in 2008, Cardinal Lopez served as president of the Pontifical Council for the Family under St. John Paul II and Pope Benedict.

The author claimed that he spoke to "dozens of witnesses" who confirmed that the Colombian prelate's homosexuality was "an open secret" both in the Vatican and in Medellin, where he served as archbishop from 1979 to 1990.

Martel also interviewed several notable Vatican figures about the allegations against Cardinal Lopez. Among them was Cardinal Lorenzo Baldisseri, general secretary of the Synod of Bishops, who served as apostolic nuncio in several Latin American countries, including Brazil and Paraguay.

"I knew (Cardinal) Lopez Trujillo when he was vicar general in Colombia. He was a very controversial figure. He had a split personality," Cardinal Baldisseri said.

Archbishop Claudio Maria Celli, the former president of Pontifical Council for Social Communications, told Martel that Cardinal Lopez "was not a saint by any means."

Martel claimed that Pope Francis is currently engaged "in a ruthless battle against all those who use sexual morality" to conceal their own "double lives" and that "these secret homosexuals are in the majority, powerful and influential."

"Threatened and attacked on all sides and generally criticized, (Pope) Francis is said to be 'among the wolves,'" Martel wrote. "It's not quite true: He's among the queens."