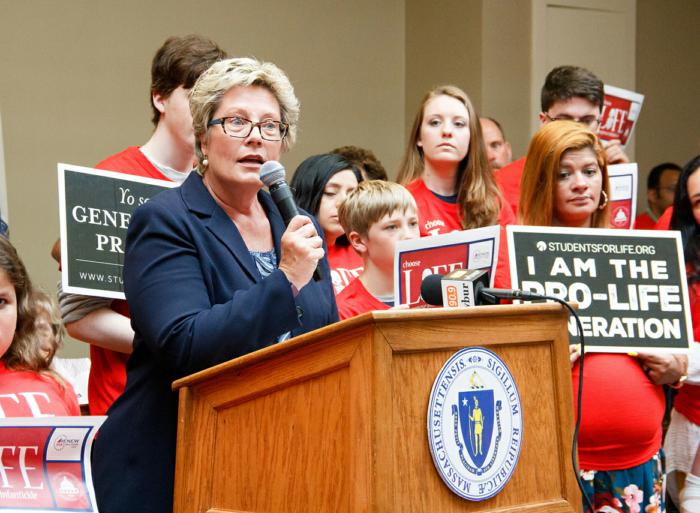 Sue Swayze Liebel, coordinator of Susan B. Anthony List's National Pro-Life Women's Caucus, speaks at a State House press conference June 5 to present the findings of a poll that showed that most voters oppose provisions of the proposed ROE Act to expand abortion in Massachusetts. Pilot photo/Jacqueline Tetrault

BOSTON -- Representatives of several pro-life organizations held a press conference at the State House on June 5 to share the results of a recent poll indicating that a majority of Massachusetts voters oppose proposed changes to state abortion legislation.

C.J. Williams, Massachusetts Citizens for Life director of community engagement, estimated that over 100 people attended the press conference. It was preceded by a rally opposing House Bill 3320 and Senate Bill 1209, an Act to Remove Obstacles and Expand Abortion Access, together called the ROE Act.

The ROE Act would allow late-term abortions (after 24 weeks gestation) in cases of lethal fetal abnormalities, and allow such abortions to be performed outside of hospitals. Physicians would no longer be required to provide medical care to infants born alive during an attempted abortion, and would not face criminal penalties for failing to do so. The bill would also provide state funding for women who cannot afford to pay for an abortion, and eliminate the requirement that a minor must have parental or judicial consent to undergo an abortion.

The survey of voter attitudes regarding the ROE Act was conducted by the Tarrance Group, a Republican strategic research and polling firm, which presented the results to Susan B. Anthony List, a national pro-life organization with a focus on advancing pro-life policy through voter education, lobbying, and grassroots campaigns.

They also found that 62 percent of Massachusetts voters, including 55 percent of Democrats and 60 percent of women, support the existing law that requires parental consent for a minor to have an abortion.

Leading members of other pro-life groups shared remarks about the bill and the polling results.

Abigail Young, New England regional coordinator for Students for Life of America, said the restrictions the ROE Act would remove are "proper, common-sense practices." She questioned why abortion should "be held to lower standards than other medical procedures."

"Pro-choice advocates have historically demanded abortion be 'safe, legal, and rare.' But with the latest onslaught of extremist abortion legislation in this country, there has been an even more apparent than ever major shift in the pro-abortion narrative to protecting safe, legal abortion. My question is, what happened to rare? And if this bill passes, what happens to safe?" Young said.

"The results that you heard indicate that common ground exists beneath this contentious and divisive issue. That's the real news here," Flynn said.

Debby Dugan, a board member of Renew Massachusetts Coalition, encouraged the attendees to sign and share her organization's petition opposing the ROE Act. The petition, which can be viewed at www.saynotoroe.com, is to be presented at the hearings for the ROE Act.

The final speakers were Representative Jim Lyons, chairman of the Massachusetts Republican Party, and his wife Bernadette Lyons. They said voters must ask their legislators a simple question: should medical care be denied to a newborn baby?

"We are not going to let this proud cradle of liberty become the shameful cradle of death," Bernadette Lyons said.

Jim Lyons talked about how bills are sponsored and the legal definition of terms, such as "infanticide" and "abortion." He said legislators often do not even read the bills they agree to sponsor, and that opponents of the ROE Act must educate both the public and their representatives.

"I urge you to continue this fight. This is a fight we cannot, and will not, lose," he said.

Attendees were encouraged to visit their representatives in the State House after the press conference adjourned.

Antonio Molle, 14, a member of Students for Life who attended the press conference, told the Pilot, "It's great to see that Catholics in Massachusetts are uniting on this one issue, like we did with assisted suicide back in 2012."

Rob Carney, a member of St. Paul Parish in Cambridge who was also in attendance, said it was "really inspiring to see so many people here of all ages, people of all religious and ethnic backgrounds."

"How can we, in good conscience, stay silent when legislation is being proposed that a child who survives abortion does not have to have care provided for them? We can do better as a state, and that's why I'm here today," Carney said.

Speaking to the Pilot after the press conference, Liebel said Susan B. Anthony List, a national organization, is trying to replicate its work at the state level, because "when Roe v. Wade is overturned, states need to be prepared for that decision," whether to make abortion legal or illegal.

"What we want to do is make sure that we can help equip those states with what they need ahead of time to prepare for those debates," Liebel said.