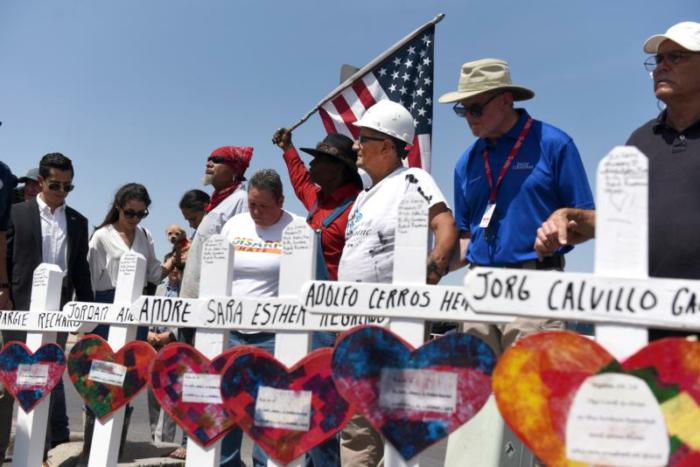 People hold hands in prayer Aug. 5, 2019, next to a crosses in honor of victims of a mass shooting Aug. 3 at a Walmart store in El Paso, Texas. Since 1996 cross builder Greg Zanis of Aurora, Ill., third from right, has delivered free of charge more than 26,000 wooden memorials at the site of mass murders and other tragedies across the U.S. (CNS photo/Callaghan O'Hare, Reuters)

After the prayer called the Angelus in St Peter's Square on Aug. 4, the pope said he wanted to convey his spiritual closeness to the victims, the wounded and the families affected by the attacks. He also included those who died a weekend earlier during a shooting at a festival in Gilroy, California.

"I am spiritually close to the victims of the episodes of violence that these days have bloodied Texas, California and Ohio, in the United States, affecting defenseless people," he said.

He joined bishops in Texas as well as national Catholic organizations and leaders reacting to a bloody first weekend of August, which produced the eighth deadliest gun violence attack in the country after a gunman opened fire in the morning of Aug. 3 at a mall in El Paso, Texas, killing at least 22 and injuring more than a dozen people.

Less than 24 hours after the El Paso shooting, authorities in Dayton, Ohio, reported at least nine dead and more than a dozen injured after a gunman opened fire on a crowd at or near a bar in the early hours of Aug. 4. The suspected gunman was fatally wounded and police later identified him as 24-year-old Connor Betts, of Bellbrook, Ohio.

On Aug. 4, after the second shooting become public, the president of the U.S. Conference of Catholic Bishops and the chairman of the bishops' domestic policy committee offered prayers, condolences and urged action.

"The lives lost this weekend confront us with a terrible truth. We can never again believe that mass shootings are an isolated exception. They are an epidemic against life that we must, in justice, face," said Cardinal Daniel N. DiNardo of Galveston-Houston, USCCB president, in a statement issued jointly with Bishop Frank J. Dewane of Venice, Florida, chairman of the USCCB's Committee on Domestic Justice and Human Development.

"God's mercy and wisdom compel us to move toward preventative action. We encourage all Catholics to increased prayer and sacrifice for healing and the end of these shootings. We encourage Catholics to pray and raise their voices for needed changes to our national policy and national culture as well," the statement continued.

Archbishop Dennis M. Schnurr, who heads the Cincinnati Archdiocese, which includes Dayton, said it was "with a heavy heart" Catholics turned to prayer this Sunday. "As tragic and violent shootings continue in our country," in El Paso and now Dayton, "I ask for everyone of faith to join in prayer for the victims and their loved ones.

Eric Spina, president of the University of Dayton, said the Marianist-run school and its community offered "our prayers for the families and loved ones of the victims and the wounded, both for our friends and neighbors here in Dayton and in El Paso, Texas."

In the shooting in El Paso, police arrested 21-year-old Patrick Crusius, of Allen, Texas. Several news organizations said local and federal authorities are investigating whether the shooting was a possible hate crime since the suspected gunman may be linked to a manifesto that speaks of the "Hispanic invasion" of Texas.

On its website, the Diocese of El Paso announced Aug. 4 that Masses would take place as scheduled on Sunday but canceled "out of an abundance of caution" a festival-like celebration called a "kermess," which is popular among Catholic Latino populations, that was scheduled to take place at Our Lady of the Light Church.

The diocese also asked for prayers and said Bishop Mark J. Seitz would be participating in an Aug. 4 interfaith evening vigil for the victims. In a statement announcing the vigil, the faith leaders said that communities need to console one another.

"Today we stand in horror and shock at the devastating loss of life and heartless attack on our border community. Tomorrow we will mourn, dry tears, offer our sacrifice of prayer and brace ourselves for the work ahead. Because even now the borderlands will stick together and the borderlands will stand together," they said in the statement released by the Interfaith Alliance of the Southwest and the nonprofit Hope Border Institute of the El Paso Diocese.

The institute, which deals with immigration issues, asked anyone who could do so to donate blood at a center in the city. It also gave local directions and offered help via Twitter for those looking for loved ones who may have been hurt in the shooting but who were afraid to contact authorities because of their immigration status.

"If you are afraid to contact the authorities regarding the shooting because of your immigration status, please contact Hope Border Institute and we will help you," the organization tweeted in English and Spanish Aug. 3.

The Sisters of Mercy of the Americas posted a prayer on their website called "Let the shooting end." They called on lawmakers to enact guns laws "to protect all in our society."

Immediately after the news of the El Paso shooting, they tweeted: "Our hearts break for the families of those killed and wounded in today's mass shooting in El Paso. A school, a movie theater, a church, a shopping mall: All places where we should feel safe, all places that have experienced senseless tragedy because of guns."

Cardinal DiNardo and Bishop Dewane said in their Aug. 4 statement that the bishops' conference has long advocated for responsible gun laws and increased resources for addressing the root causes of violence and called upon the president and congress to set aside political interests "and find ways to better protect innocent life." 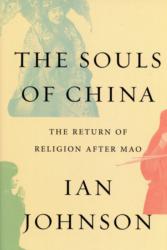