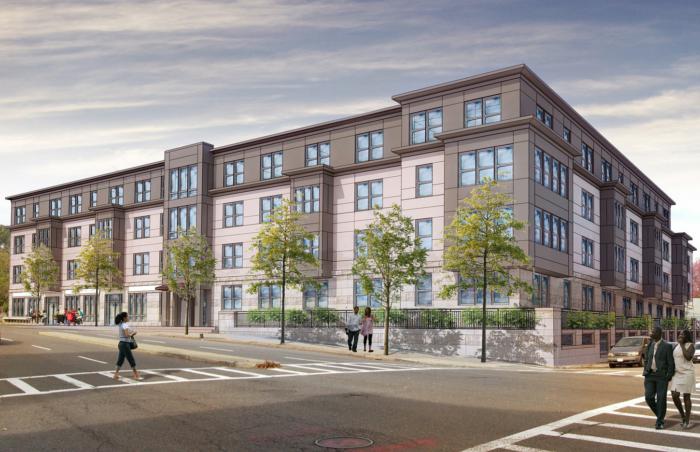 BOSTON -- State and local officials joined nonprofit leaders and community members on Dec. 18 for the groundbreaking ceremony of Cote Village Apartments and Cote Townhomes, an affordable housing development to be built at 820 Cummins Highway in Mattapan.

Cote Village is a collaboration of the Planning Office for Urban Affairs (POUA) and the Caribbean Integration Community Development (CICD), a nonprofit that aims to strengthen Caribbean diaspora by providing Boston's minority neighborhoods with economic opportunities, educational programs, and housing development.

Cote Village will be built on the site of the former Cote Ford Dealership, which has been vacant for over 30 years. The location is close to shopping centers and adjacent to Blue Hill Avenue station on the Fairmount Line.

The new energy-efficient development will feature 76 units of income restricted and mixed-income housing, as well as commercial and community space.

Twelve units will be for residents who earn less than 30 percent of the area median income or AMI, which is less than $27,900 for a household of three. Eight of these 12 units would be reserved for formerly homeless individuals and families.

Donald Alexis, president of CICD, said the development is "the first of its kind -- a community that is truly all affordable and built 100 percent by union laborers. Our goal was to create housing that reflects the needs of the working-class residents in Mattapan and I believe we've accomplished that here."

Bill Grogan, president of the POUA, said the groundbreaking "represents an important step in our collective efforts to address the housing need in communities like Mattapan."

"The creation of new affordable and workforce housing options is a moral imperative and critical to maintaining the City of Boston and the Commonwealth as a vibrant community and a place to live. We are especially grateful to the Commonwealth, the City, our funders and supporters who have made the development of Cote Village possible, and especially to our partners at CICD," Grogan said.

Cardinal O'Malley said the project was "the result of a shared commitment and collaboration in meeting the many needs of families in these challenging economic times."

"This mixed-use property is important to the local community and is supported by the mission of the Church. Pope Francis has called us to defend and preserve the dignity of our fellow citizens in 'the tireless and demanding pursuit of the common good.' He tells us that the common good includes everyone, but especially those in situations of greater vulnerability and risk. With Cote Village we are answering that call," Cardinal O'Malley said.