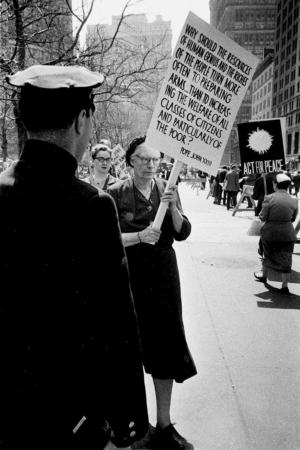 Dorothy Day pickets civil defense drill New York City in 1959. Day is the subject of the new documentary "Revolution of the Heart: The Dorothy Day Story" that will be screen at Boston College Jan. 22 and air on PBS in March. Vivian Cherry photo/courtesy Journey Films

BOSTON -- Boston College will hold a screening next week of "Revolution of the Heart: The Dorothy Day Story," a new documentary by Martin Doblmeier and Journey Films.

"Revolution of the Heart" is the latest installment in "Prophetic Voices," Doblmeier's series of documentaries about American religious figures of the 20th century.

Doblmeier built his career by uniting his passions for faith and film. He holds a degree in television and filmmaking from Boston University and a degree in religious studies from Providence College. In 1983, Doblmeier founded Journey Films, a television and film production company that specializes in films exploring religion, history, and social issues. Since the early 1980s, Doblmeier has produced and directed over 30 films, winning two Emmy awards and numerous other accolades.

Previous films in the series focused on Reinhold Niebuhr and Howard Thurman. The next film in the series, Doblmeier said, will be about Rabbi Abraham Joshua Heschel.

In a Jan. 9 interview with the Pilot, Doblmeier said Day seemed like a "natural" and "ideal candidate" for the "Prophetic Voices" series.

"I think she's one of the most remarkable, courageous figures of the 20th century," he said.

Dorothy Day, who lived from 1897 to 1980, was a journalist, social activist, and political radical, who gained public attention after converting to Catholicism. A committed pacifist, she protested America's participation in World War II and the Vietnam War, and was arrested multiple times for protesting America's nuclear buildup. She co-founded the Catholic Worker Movement and The Catholic Worker newspaper, and developed a network of hospitality houses to serve the poor.

"There were no compromises in the way that she lived, and there was, every day, a commitment to live a life that was in line with the gospels and with the beatitudes. And you may not agree all the time with what she was, her conclusions on how to do that, but I think it's hard to deny that she was one of the most authentic livers of the gospel and the beatitudes that this country's ever seen, and I think we desperately need that today," Doblmeier said.

In 2000, Day's cause for canonization was opened and she was granted the title Servant of God.

Doblmeier spent nearly two years researching Day's life in order to make "Revolution of the Heart," which includes archival footage and photographs of Day as well as interviews with actor Martin Sheen, Cardinal Timothy Dolan, and Day's granddaughters Martha Hennessy and Kate Hennessy. Boston College students may recognize one interviewee as Father Mark Massa, professor of theology and director of the Boisi Center for Religion and American Public Life at Boston College.

Doblmeier said he thinks that when people see the documentary, "Everyone will be asking, how does she speak to us today, at these really divided times?"

"I think that having a story about a character like Dorothy Day, who lives her life faithfully and finds a way to be both faithful and socially engaged in our country, involved in the politics, involved in the social movements of our country, I think is just a wonderful example of how you can put your faith into action," Doblmeier said.

"Revolution of the Heart" was released on DVD on Jan. 6 and will begin airing nationwide on PBS stations on March 6 in honor of Women's History Month.

Doblmeier is scheduled to attend approximately 40 screenings of the film throughout the county from January through March. He said he is looking forward to showing the film on college campuses, and that he hopes young people in particular will come to see it.

"It's a privilege to tell this story," he said.

Boston College's Boisi Center for Religion and American Public Life will hold its screening of "Revolution of the Heart: The Dorothy Day Story" on Jan. 22 at 5 p.m. in Devlin Hall, 101. The screening will be followed by a discussion with Doblmeier, Brianne Jacobs of Emmanuel College, and Jeannine Hill Fletcher of Fordham University.