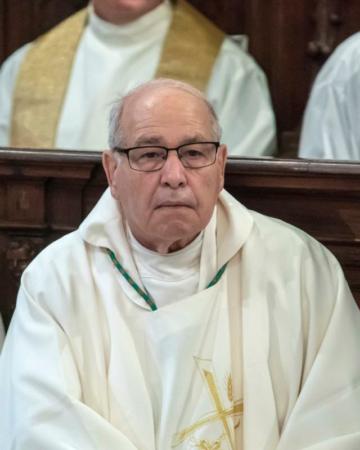 JACKSONVILLE, Fla. (CNS) -- In his fifth pastoral letter since becoming head of the Diocese of St. Augustine nine years ago, Bishop Felipe J. Estevez said Catholics "are called to stand for the inviolability and dignity of all human life."

This holds true "even when a person whose life is in the balance has made great mistakes, such as taking another's life. Not even a murderer loses his dignity," he said in his 20-page pastoral on the death penalty in Florida.

"Protecting human rights and the inviolable dignity of each human made in the image of God motivates me to publish this pastoral letter on this controversial social issue," Bishop Estevez said. "Our system of incarceration needs to change from inhumane punishment to hopeful rehabilitation. Everyone must be concerned that not a single innocent human is condemned to deadly execution."

The 20-page document, released in mid-May, is titled "Standing Up for the Dignity of all Human Life: A Pastoral Letter on Capital Punishment in Florida." It addresses the teachings of the church about the intrinsic value and God-given dignity of every human life from conception until natural death.

"We believe that God -- and only God -- is the author of every human being, and only God should determine the end of that life," the bishop wrote.

Bishop Estevez also draws attention to the dignity of the victims of the accused and their families, saying, "A vital dimension of our prayer and our advocacy remembers the victims. ... They must never be forgotten. ... Our family of faith must stand with them as they struggle to overcome their terrible loss and find some sense of peace."

He draws on the writings and teaching of three popes -- St. John Paul II, Pope Benedict XVI and Pope Francis -- and his predecessor the late Bishop John J. Snyder. All them challenged the world to stand up against the death penalty.

Bishop Estevez cites the example of Catholics whose lives were cut short because of their ministry "and high regard for human life," such as St. Maximilian Kolbe, who voluntarily took the place of a condemned inmate in Auschwitz, and one of the Diocese of St. Augustine's own priests, Father Rene Robert, who advocated for an end to capital punishment 21 years before his murder in 2016.

He also highlights the long-standing efforts of Florida's Catholic bishops to create a culture, including many statements against the death penalty. Florida Catholics also have organized many candlelit vigils on behalf of prisoners facing execution. He also points to Dale Recinella, who has served for more than 20 years in the St. Augustine Diocese ministering to death-row inmates.

"We are living in a time when the God-given gift of human life is under assault," Bishop Estevez said. "We are immersed in a culture of death that seeks to use death as a solution to social, personal and financial issues.

"As a diocese and through our beautiful parishes, we are responding to this challenge on many fronts, especially the taking of innocent human life. The horrors of abortion, infanticide, euthanasia and assisted suicide, for example, are consistently and energetically confronted and resisted by the faithful, religious and clergy of our diocese."

"And we face a more profound challenge in the battle to protect the dignity of the human person" -- the death penalty, he said.

"The life of St. Kolbe and his execution by lethal injection in an Auschwitz cell speak loudly to us as we stand before the assault on the dignity of human life through capital punishment," he said.

"This is especially true in the state of Florida, which has been severely criticized for an execution process that lacks transparency in its clemency. No death-row inmate in Florida has been granted clemency since 1983," he explained.

Regarding papal teaching on capital punishment, Bishop Estevez discusses the change Pope Francis and the Congregation for the Doctrine of the Faith made in 2018 to the Catechism of the Catholic Church. It now states the "death penalty is inadmissible because it is an attack on the inviolability and dignity of the person."

In June 2019, the U.S. bishops voted to revise the death penalty section of the U.S. Catholic Catechism for Adults based on that change.

But Bishop Estevez points out St. John Paul in his 1995 encyclical "Evangelium Vitae" ("The Gospel of Life") said the death penalty was "morally permissible only in those rare instances where it would not be possible otherwise to incarcerate someone safely and keep them from harming society." These "rare instances" were nearly nonexistent, the pope emphasized.

"When visiting our country, St. John Paul II continued to challenge us to discard capital punishment," Bishop Estevez recalled and quoted the pontiff at his papal Mass in St. Louis Jan. 27, 1999:

"The new evangelization calls for followers of Christ who are unconditionally pro-life: who will proclaim, celebrate and serve the Gospel of life in every situation," the pope said. "A sign of hope is the increasing recognition that the dignity of human life must never be taken away, even in the case of someone who has done great evil.

"Modern society has the means of protecting itself, without definitively denying criminals the chance to reform. I renew the appeal I made most recently at Christmas for a consensus to end the death penalty, which is both cruel and unnecessary," the pope added.

Pope Benedict XVI continued to support the limitation and eradication of the death penalty during his pontificate, Bishop Estevez noted.

"While humbly recognizing there is still much work to do in promoting our belief in the sanctity of life, there seems to be a growing consensus everywhere that capital punishment is unnecessary to protect society from the worst offenders," Bishop Estevez wrote.

"We cannot overcome crime by simply executing criminals, nor can we restore the lives of the innocent by ending the lives of those convicted of their murders," he added. "The death penalty offers the tragic illusion that we can defend life by taking life."