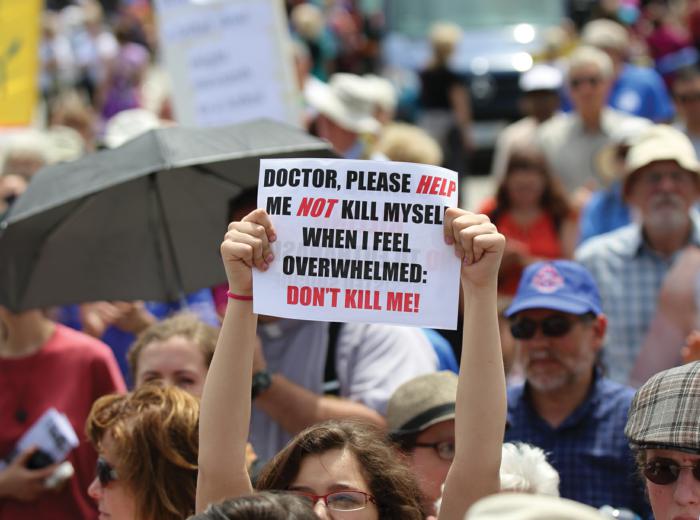 A woman holds up a sign during a rally against assisted suicide in 2016 on Parliament Hill in Ottawa, Ontario. CNS photo/Art Babych

BRAINTREE -- The Massachusetts Catholic Conference (MCC), the public policy of arm of the Church is the state, issued an alert June 9 that a bill to legalize physician-assisted suicide in the Commonwealth has advanced on Beacon Hill.

The Catholic Church was part of a coalition of groups that helped narrowly defeat a ballot question that would have legalized physician-assisted suicide in 2012. According to MCC executive director Jim Driscoll, bills to legalize physician-assisted suicide have also been submitted in every legislative session for the past decade. However, this is the first time such a bill has received a favorable recommendation from a committee and moved out of the committee level where the hearing took place.

Last week, the Joint Committee on Public Health has voted to advance S2745, "An Act relative to end of life options." If the bill were passed by the full legislature and signed into law by the governor, physician-assisted suicide -- also referred to as medical aid in dying by proponents -- would become legal in Massachusetts. Driscoll testified against the bill during its hearing on June 25, 2019. He said it was "disappointing" to see the bill advance.

"We refer to it as physician-assisted suicide because that's what it is," Driscoll June 4.

"A bill that would permit the act of ending a life before natural death is very disturbing and is something the bishops have spoken out against for years and years," he said.

In his June 9 alert to the public, Driscoll highlighted what opponents see as flaws in the bill. If the bill were passed in its present form, the drugs to induce a patient's death would be obtained at local pharmacies. There is no requirement that a doctor, nurse, family member, or any witness be present when the drugs are taken. There are no safeguards for access to the drugs after the prescription is filled, so if a patient were to delay or decide against using them, the drugs could remain in a household and be available for misuse.

Driscoll also pointed out that prognoses of having only six months or less to live often prove incorrect. The elderly and disabled may also feel pressured to consider physician-assisted suicide because they do not want to be a "burden" on their families.

The bill has now moved to the Health Care Finance Committee for its review. The timeline for the bill is uncertain, due to the COVID-19 pandemic's disruption of the legislative session.

"We must do what we can to prevent it from going any further than the committee level. Efforts by the MCC and other like-minded groups and individuals to defeat these bills are ongoing," Driscoll said in his letter.

More information on the bill can be found on the website of the Massachusetts Catholic Conference, www.macatholic.org.