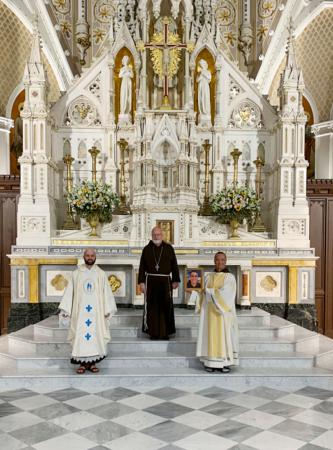 On Saturday, June 13, Cardinal O'Malley celebrated the ordination of two Capuchin brothers at the Cathedral of the Holy Cross: Brother Diogo Escudero (left) to the priesthood and Brother Keon Tu (right) to the transitional diaconate. Pilot photo/CardinalSeansBlog.org

On Saturday, June 13, I went to Castle Island in South Boston to celebrate a special Mass for racial justice and healing.

I was gratified to be part of that celebration at the very place that the parishioners from St. Brigid's and Gate of Heaven usually have their sunrise service on Easter. I thought it was very significant for us to have this Mass there, particularly considering there has been a difficult history around the issue in South Boston.

I was most edified by the presence of so many black ministers at the Mass, including Rev. Gene Rivers, Rev. Ray Hammond and his wife, Gloria, and, of course, Bishop William Dickerson, who gave a beautiful talk before the Mass.

After the Mass, one of the black priests who was with us told me that when he came to Boston in the 80s, his friends told him not to go to Southie because it would be too dangerous for him. So, having a Mass there around the theme of racial justice and the Church's social teaching was very poignant.

Later that day, I was very happy to celebrate the ordination of two Capuchin brothers at the Cathedral of the Holy Cross -- Brother Diogo Escudero to the priesthood and Brother Keon Tu to the transitional diaconate.

With us were our provincial, Father Tom Betz, and the guardian of Capuchin College, Father Paul Dressler.

We also remembered their classmate, Brother Saul Soriano, who would have been ordained with them but died suddenly a year ago.

It was a joy to be able to celebrate the ordination here in the Cathedral of the Holy Cross. We are grateful to CatholicTV for live-streaming the Mass so that our Capuchin Friars and their families that are in different corners of the world -- Father Diogo is from Brazil and Deacon Keon is from China -- were able to watch it.

Sunday was, of course, the feast of Corpus Christi and marked the start of our Year of the Eucharist in the Archdiocese of Boston. As many of you know, we had originally planned to begin the Eucharistic Year on Holy Thursday. However, because of the restrictions on public Masses, we decided to postpone it until Corpus Christi.

Although we are unable to hold large gatherings at the present time, we are hoping that there will be a number of activities in the parishes to mark the Year of the Eucharist. That is why, last week, we commissioned over 450 Eucharistic missionaries from the various parishes to help promote different ideas for local observances.

I think that after the long period of being unable to receive the Eucharist, people are anxious to return to Mass and receive Holy Communion. Hopefully, this will be an opportunity for us to reflect on this great gift and to live the spirituality of the Eucharist, which is one of unity, service, and love. That sign of unity, service, and love is what the world needs so desperately today.