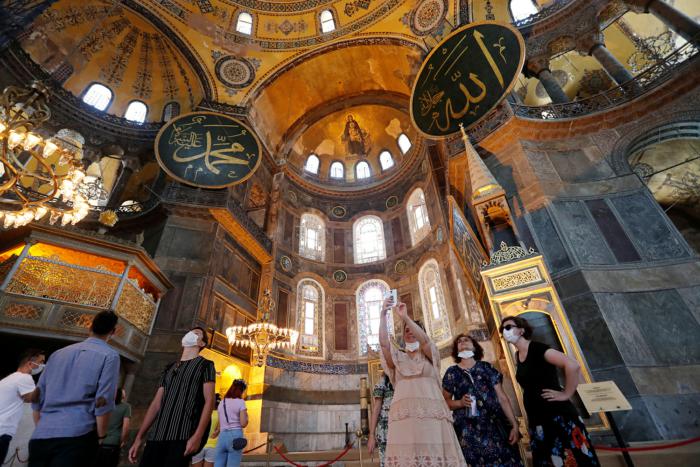 WASHINGTON (CNA) -- As Christians and world leaders lament Turkey's reconversion of Hagia Sophia into a mosque, some experts warn that the act could spell a religious resurgence as much as a nationalist action.

"This is as much a religious statement as it is a geopolitical statement, and I think it needs to be read as such," said Dr. Elizabeth Prodromou, director of the Initiative on Religion, Law, and Diplomacy at the Fletcher School of Law and Diplomacy at Tufts University.

Prodromou is a former vice chair on the U.S. Commission on International Religious Freedom, who researches geopolitics and religion with a focus on the Middle East and Southeastern Europe.

Turkish President Recep Tayyip Erdogan, she said, cited Turkey's Islamic history in his speech on Hagia Sophia to announce its destiny and its "natural right" as "the leader of Muslims worldwide."

On July 2, a Turkish court ruled that the 1934 conversion of Hagia Sophia from a mosque to a museum was unlawful. The decision was announced July 10, and then Erdogan announced that Hagia Sophia would be converted back into a mosque.

Hagia Sophia, the church of "Holy Wisdom," was built in the year 537 and served as the cathedral of the Patriarch of Constantinople. It stood as the largest known building in the world and the largest Christian church, for a period of time.

In the year 1453, Turkish armies sacked Constantinople and the church was turned into a mosque. In 1934, the cabinet of then-Turkish leader Mustafa Kemal Ataturk -- head of a secularist government -- converted the mosque into a museum and opened it to visitors from around the world.

Christian and political leaders around the world condemned the decision to reconvert Hagia Sophia. Pope Francis on July 12 said he was "very saddened" when thinking about Hagia Sophia, and Eastern Orthodox Ecumenical Patriarch Bartholomew of Constantinople said its status must not change, as it is "the symbolic place of encounter, dialogue, solidarity and mutual understanding between Christianity and Islam."

The president of the advocacy group In Defense of Christians, Toufic Baaklini, said in a July 7 op-ed that Erdogan "is unapologetically nostalgic for the days of the Ottoman Empire," and that his plan "is of a piece with his Islamist vision for the country."

Erdogan made his announcement in a lengthy speech that was littered with historical, geographical, and religious references to the old Islamic world, Prodromou pointed out, as the president connected Hagia Sophia's reconversion to a much-broader "Islamic renaissance."

For instance, the Turkish leader mentioned historic sites such as Manzikert -- where Seljuk Turks scored a decisive military victory over the Byzantine Empire in 1071 -- Bukhara which lies in modern-day Uzbekistan, and Andalusia in Spain, a center of Islamic education in the Middle Ages. Erdogan hailed Turkish Islamic figures such as the victorious Seljuk Turk warrior Alp Arslan from the 11th century, and Sultan Abdul Hamid II of the 19th century, who rejected reforms to liberalize the Ottoman Empire in line with European powers of the day.

Erdogan specifically chose these "historical figures" to promote the depth of Turkey's history and to "encompass Turkic tribes from Central Asia into the Ottoman Empire," she said.

It was a speech "heralding the liberation of the full Muslim world," Prodromou said.

The speech rooted Turkey's "sovereign right" to reconvert Hagia Sophia in its Islamic past, and aims to "justify what he (Erdogan) sees as a kind of religious destiny, and also a geopolitical model for Turkey's revisionism and expansionism."

Erdogan is "trying to fuse Islam and Turkish nationalism in a way that energizes those two twin bases," she said of his political ambitions, and thus it carries serious implications for religious freedom, equal treatment under the law for religious minorities, and respect for cultural heritage in Turkey.

Christian minorities in particular could be affected by such a change in policy. Turkey's population is overwhelmingly Sunni Muslim, with Catholics, Orthodox Christians, and other Christian denominations making up only a tiny fraction of the population. There are 2,000 or fewer Greek Orthodox Christians left in the entire country, Prodromou said.

Erdogan's speech, she said, "is a clear signal, in particular, to the Ecumenical Patriarchate of Constantinople," as well as "a signal beyond them" to other religious minorities, "that this is about Sunni Islamic dominance and hegemony in Turkey."

It also aims "to promote division" between Christians and Muslims "that need not exist," she said.

And the goals outlined in Erdogan's speech could impact not just Turkey, but the broader region of the Middle East as well.

In his July 10 speech, Turkish leader predicted that Hagia Sophia's reconversion would herald the liberation of al-Aqsa mosque on the Temple Mount in the old city of Jerusalem, the third-holiest site in Islam.

Erdogan views Turkey as the mosque's "protector," Prodroou said, as well as the protector of "all Muslims who seek to go and pray there."

Given Turkey's history of violating the sovereignty of its neighbors such as Iraq, Iraqi Kurdistan, Northern Syria, and Cyprus, she said, "this is a declaration that Turkey will do as it wishes" in the wider region and even beyond the region "where it sees its sovereignty rights, even where those are completely at odds with international law."

"It's also a powerful rejection of the Kemalist understanding of secularism, which ultimately was about control of religion," she said of the previous secular government that had converted Hagia Sophia into a museum.

Hagia Sophia will become a mosque on July 24 -- a date which is "rife with symbolism," Prodromou said. It's the anniversary of the Treaty of Lausanne, signed in 1923 after the defeat of the Ottoman Empire in World War I, which established the borders of the modern Turkish state and included explicit protections for Christian minorities there.

"He (Erdogan) has stated indirectly -- and increasingly, directly -- that he sees Lausanne as something that should be abrogated," Prodromou said. It's also a signal to Turkey's NATO allies and fellow countries that it "is not interested in continuing within the context of treaties that are meant to provide stability and order in the region."