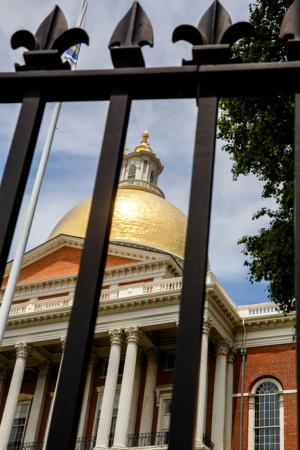 BRAINTREE -- While not endorsing any particular bill, the bishops of the four dioceses of Massachusetts expressed their support for police reform legislation in a joint statement released July 23.

The statement came almost exactly two months after the date that George Floyd died in police custody in Minneapolis. Floyd's death sparked weeks of protests against racism and police brutality, as well as widespread calls for police reform, across the U.S.

In their statement, the Massachusetts bishops spoke of "the sin of racism" and the patterns of awareness and action that are triggered by acts of violence against minorities, alluding to how Floyd's death revived dialogue about how to address racism and promote racial justice.

"Meaningful debate raises expectations that society will finally emerge from the culture of racism. However, as history has shown, those discussions ultimately fade into the background as time elapses and other seemingly pressing issues make any change less urgent and somehow less important," the bishops said.

They said this "collective mindset and cycle of inaction must end now."

"We are all created equal in the eyes of God and all human lives are to be valued and protected. It is upon us to make that human equality the norm -- not the exception," they said.

They pledged their "full support to the cultural shift towards meaningful reforms in the area of racial injustice."

While acknowledging that racial injustice and inequality underlie many different issues, including education, housing, employment, and the judiciary, the bishops focused specifically on the matter of law enforcement, voicing their "support of the efforts of Gov. Baker and the legislature as they craft a bill to enact meaningful police reform."

"We acknowledge the vast majority of the police officers in the state of Massachusetts are capable and honorable public servants who serve and protect all residents with distinction. We also acknowledge that racial biases have infiltrated the mindsets and actions of some police officers. Those are the individuals targeted by the legislation currently being debated by our lawmakers. That legislation is a step in the direction of meaningful change and is the reason we support our elected officials in their efforts to address these systematic problems," the statement read.

The bishops said that recent acts of violence committed by police officers across the country indicate that police training, methods, and attitudes must be assessed and consequently improved. They said these changes must be implemented "with the expertise, input, and cooperation from as many resources as possible -- especially, those who have experienced racial injustice firsthand."

The bishops made it clear that they do not endorse any particular bill in the legislature. However, they said they "strongly support legislation that draws the best ideas from each bill, creating a best practice model for meaningful reform."

One point of disagreement among legislators is the concept of qualified immunity, which protects officers from personal liability for misconduct. The House's police reform bill, which it passed on July 24, keeps the state's qualified immunity law largely intact, while the Senate's version curtails it.

As of press time, specific measures for police reform are expected to be debated as the legislative session approaches its scheduled end on July 31.

The Massachusetts bishops said that Floyd's death "finally triggered a movement that will not be deterred, will not be silent and will not die. Laws need to be changed across the country. We have been given the opportunity to contribute to that change in the Commonwealth of Massachusetts. This will be a defining moment in Massachusetts history."

In closing, they said, "The time has come for all of us to do our part to end racism and unite as one race. That time is now, let us seize this opportunity, always remembering more work will remain."

The statement was sent to the governor and every member of the state legislature (200 members), as well as the NAACP of Boston, The Black and Latino Legislative Caucus, and other interested parties.