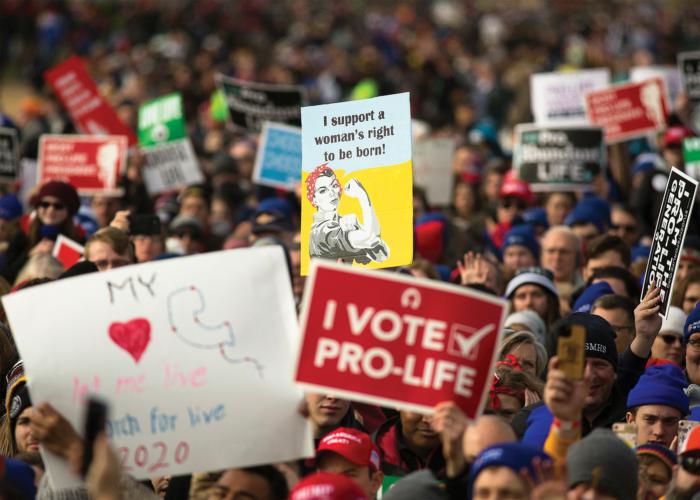 People gather during the annual March for Life rally in Washington Jan. 24, 2020. With many pilgrimages canceled because of the coronavirus pandemic, local organizers are planning virtual and outdoor in-person events to mark the anniversary Roe v. Wade. CNS photo/Tyler Orsburn

BOSTON -- Since the risks and restrictions of the coronavirus will prevent many people from attending this year's National March for Life on Jan. 29, local churches and pro-life groups are planning alternative ways to show their support for life in their own communities.

The annual march is held in Washington, D.C., every January around the anniversary of the Supreme Court decisions Roe v. Wade and Doe v. Bolton, which legalized abortion in the United States in 1973. The Archdiocese of Boston usually organizes a bus trip for people to attend the march, but will not do so this year. However, there are a few smaller marches taking place in Massachusetts, as well as other activities that people can participate in to show solidarity with the national march and raise awareness of the cause for life.

Marianne Luthin, the director of the archdiocese's Pro-Life Office, said it is "nice to see how people are trying to make a difference."

"There's so much concern and uncertainty over so many things, especially after the ROE Act," she said in a Jan. 7 interview.

Luthin said she thinks this year's anniversary of Roe v. Wade will be "a much more prayerful observance."

"There's a heaviness of heart among many about the need for our culture to be more respectful of the value of life. And prayer is where we need to begin (and) focus," Luthin said.

To that end, some churches are planning to hold Holy Hours for Life this month. Many parishes do this around the anniversary of Roe v. Wade, often under the direction of permanent deacons.

"Originally the Holy Hours were designed to bring the power of the Eucharist to prayers for life and hope and healing," Luthin said.

Deacon John Barry of St. Mary Parish in Holliston said his parish has held a Holy Hour for Life every year since 2013, and they felt it was even "more important" to do so this year.

"We felt it more important this year, really than any other. In my opinion there can't be a more critical time for us to hold a Holy Hour for Life in our archdiocese," Deacon Barry said on Jan. 8.

According to Luthin, last year, 170 parishes held Holy Hours for Life. This year, far fewer are doing so, but many of them are livestreaming their services, allowing more people to participate.

Massachusetts Citizens for Life (MCFL) is involved with several local events, including marches, a virtual walk fundraiser, and a weekend of activism training.

"I see members getting excited for the fact that they're going to be raising awareness right here in our communities, where we have the most power to change the culture and to change the laws," she said Jan. 8.

One of MCFL's upcoming events is a walk to raise funds for their campaign to repeal the ROE Act, the recent state legislation that expanded access to abortion in Massachusetts. Participants will aim to walk or run at least five kilometers during the week of Jan. 22-29. Williams said participants are encouraged to wear an MCFL hat or scarf while walking in order to raise awareness of their cause. Those who wish to participate can contact her at cj@masscitizensforlife.org to set up a fundraising page online.

MCFL is also co-sponsoring socially-distanced marches throughout the state. In Springfield, on Jan. 22, there will be a Mass at St. Michael's Cathedral at 10:30 a.m., followed by a march starting from the parking lot and a rosary for those who are unable to join the march. In the diocese of Fall River, a Walk for Life will take place in Attleboro on Jan. 23 at 6 p.m., starting at St. Vincent de Paul Church and ending at St. John the Evangelist Church, followed by praise and worship. Finally, on Jan. 29, the same day as the national march, there will be a March for Life in Boston. It will begin at 1 p.m. at the Parkman Bandstand and circle the Boston Common and Public Gardens.

MCFL and Students for Life are co-sponsoring Stand4Life, a weekend of activism training for students and young professionals, scheduled for Jan. 27-30. The weekend will include virtual talks and training with MCFL and SFL staff members, as well as a remote lobbying day on Jan. 28. It will culminate with the March for Life in Boston on Jan. 29.

Williams said they hope to "make a digital and social media splash" by posting about their activities in order to show unity with other pro-life activists and show the numbers that would usually be at the National March for Life.

Meanwhile, many of the national events related to the March for Life will be televised for those who cannot attend in person, and CatholicTV is holding special pro-life programming throughout the month of January.

A CatholicTV original, "Restored," will air every Friday at 11 a.m. after "This is the Day," featuring various guests and "focusing on how life unites us all," according to the CatholicTV magazine.

Cardinal Seán P. O'Malley will participate in multiple televised events, including a Culture of Life Mass on Jan. 24 and the National Prayer Vigil for Life on Jan. 28-29.

The National Prayer Vigil for Life usually takes place in the Basilica of the National Shrine of the Immaculate Conception in Washington, D.C., the night before the March for Life. This year, due to local restrictions on attendance sizes, the vigil will take place virtually, with bishops across the country leading livestreamed Holy Hours throughout the night of Jan. 28-29.

The vigil will begin at 8 p.m. on Jan. 28 with the praying of the rosary followed by Mass in the basilica. The principal celebrant and homilist for this Mass will be Archbishop Joseph F. Naumann of Kansas City, Kansas, chairman of the United States Conference for Catholic Bishops' Committee on Pro-Life Activities.

Cardinal O'Malley will preside over the final Holy Hour, from 7 to 8 a.m. on Jan. 29, in the Cathedral of the Holy Cross. The vigil will then close with a Mass celebrated by Archbishop William E. Lori of Baltimore.

Cardinal O'Malley will also participate in a "Mass for Giving Thanks to God for the Gift of Human Life" on Jan. 29, airing on CatholicTV at 11 a.m. and rebroadcast at 8:30 p.m. The video of this Mass will be shared with parish and school groups who are encouraged to view it together, as though they were in Washington with the cardinal, creating a sense of unity despite being apart.

"If nothing else, prayer brings us together in unison, which is really what the word 'catholic' is all about," Deacon Barry said.