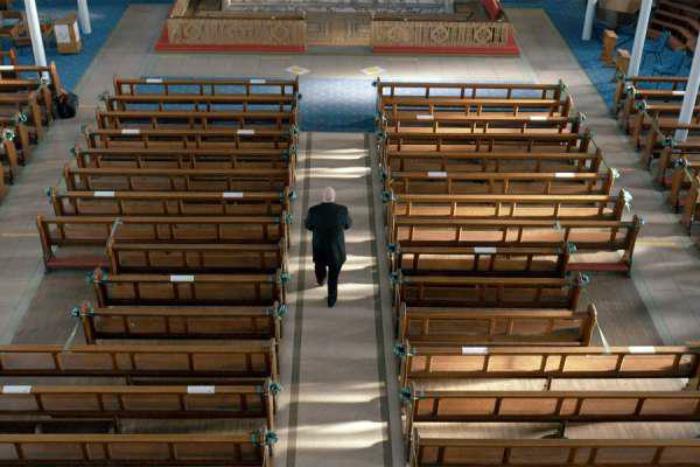 Glasgow, Scotland, Feb 19, 2021 CNA.- Scotland’s coronavirus-related ban on public worship goes too far and churches that follow appropriate precautions should be allowed to open for in-person worship like in other parts of Europe, a Scottish priest has said in a challenge to the government.

“As a priest, I have witnessed first-hand the grief and suffering that Covid-19 has caused for my parish members,” Father Tom White, Dean of the City East St Alphonsus Church in Glasgow, said Feb. 16. “Therefore I know, as a priest, that we need to open my church to be able to support them best in their hour of need.”

White’s parish in the Calton district of Glasgow contains three of the poorest areas in the U.K., which had very low life expectancy even before the pandemic.

He has filed a pre-action letter with the Scottish government seeking to lift the ban on gatherings for places of worship. The government must respond before Feb. 23.

“I speak for many in the church when I say that it’s very important to keep people safe and well during this pandemic,” the priest said. “But this can and should be done while also allowing people to fulfil their need to draw close to God and worship in community at the church. With appropriate safety measures, we can accommodate both of these outcomes, as is shown in England, Northern Ireland and Wales.”

After restrictions took effect Jan. 8, places of worship may only conduct weddings and funerals, with strict limits on the number of attendees. They may only broadcast other services online.

In neighboring England, churches have remained open for worship with strict public health measures to limit coronavirus spread. In Northern Ireland, public worship is technically allowed but the Catholic Church, the Church of Ireland, and Presbyterian and Methodist leaders have said churches will be closed until at least March 5, The National newspaper reports.

White’s effort to open churches safely has the support of the religious freedom group ADF International.

“Freedom of religion is a foundational human right,” said Ryan Christopher, director of ADF International in the U.K. The group supports the priest’s case “because domestic and international law require the government to protect freedom of worship, including in public or in private, individually or in community with others.”

“This right should be limited only to the extent that is necessary and proportionate,” Christopher continued. “The government’s medical advisors have conceded there is no robust medical evidence for the closure of churches, which remain open in most European countries. We must find solutions which protect both the vulnerable and those who understand their communal worship to be as essential as food and water.”

Lois McLatchie, a communications officer for ADF International from Scotland, was also critical of the strict ban.

“Why should Scots be denied the freedom afforded to our English neighbors?” she asked. “Authorities in England, Wales and Northern Ireland – and indeed, most of the rest of the world – have found a way to protect the public while also respecting the rights of religious communities. It is unclear why the Scottish government cannot do the same.”

White said he was “most encouraged” by ADF International’s support. The ban on public worship is “an issue which is weighing heavily on the heart of my community at this difficult time.”

Scottish First Minister Nicola Sturgeon has said priority will be given to re-opening churches in the government’s plans to exit the lockdown, the Glasgow Times reports.

At the Scottish Parliament Feb. 16 Elaine Smith, MSP for Central Scotland, had asked Sturgeon for reassurances about church reopenings, given the start of Lent and the approach of Easter.

Sturgeon said the government will “try to get places of worship back to normality.”

“Places of worship are not closed but of course the ability to worship normally and freely is restricted and I deeply regret that, as I know everybody does,” she said. “We want to get that back to normality as quickly as possible.”

“I think you will see that there is a priority given to getting places of worship open again given the importance we attach to that,” she said. “So we will continue to try to do that as quickly as possible.”

Sturgeon stressed the need to exit the lockdown in “a sensible and sustainable way and hopefully avoid the need for another one later in the year.”

In a Jan. 5 statement, Scotland’s Catholic bishops said they were “perplexed” by the decision to close churches again, given that other sectors closed during the March lockdown, like construction, manufacturing, and elite sports, were allowed to continue to operate.

The bishops said the ban on public religious services seems “arbitrary and unfair”, given the evidence that public safety measures in churches have been effective at preventing the spread of coronavirus infections.

They emphasized the “spiritual, social and psychological benefits” of public worship.

“Public worship is a human right and is a duty humanity owes to God,” they said, stressing the importance for Catholics of the physical encounter with the Eucharist.

“Such actions would not only put their own congregations at risk but also risk further community spread,” he said, according to the Scottish newspaper The National.

A poll commissioned by The Humanist Society and conducted by the pollster Survation indicated that only 17% of people in Scotland wanted places of worship exempt from coronavirus restrictions.

Father White is not the only clergyman opposed to the strict rules.

However, as a body the Church of Scotland has distanced itself from the legal action.

“We fully accept that the latest pandemic restrictions mean that we have to close churches again for the time being,” a Church of Scotland spokesperson said in January. “The vast majority of our members understand and support these temporary restrictions and anybody associated with the Church of Scotland backing this action are speaking purely for themselves.”