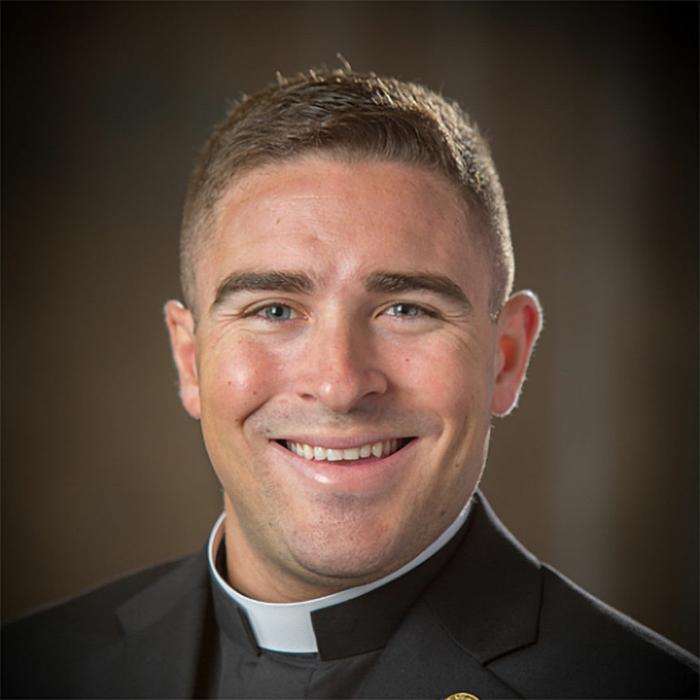 This is the first in a series of articles profiling the five men who will be ordained to the priesthood for the Archdiocese of Boston at the Cathedral of the Holy Cross on May 22.

BRIGHTON -- Even though he spent his childhood in Libertyville, a town north of Chicago, Deacon Robert LeBlanc has always considered Boston his home.

His parents were from Newton, and when he was halfway through college, his family moved back to the East Coast.

"Boston's always really been home for me. It's where my family's all from, so I had spent a lot of time in the Boston area," Deacon LeBlanc said in a March 24 interview.

Growing up a "cradle Catholic," he sometimes went to daily Mass with his mother, who went deeper into her faith when Deacon LeBlanc was in middle school. But he did not get too involved in it himself until college.

He wanted to work in sports, so he decided to study journalism at Boston University's College of Communication. Throughout his time there, he became increasingly involved with the school's Catholic Center.

"It's where I first started to choose my Catholic faith on my own," Deacon LeBlanc said.

Over time, he grew into more leadership roles through the Catholic Center, leading retreats, men's groups, and Bible studies. In his junior year, Msgr. John McLaughlin, the chaplain at the time, suggested that he might consider the priesthood.

It was the first time anyone had made that suggestion to Deacon LeBlanc. Growing up, his brother had been an altar server and was thought by their family to be the one most likely to become a priest. Deacon LeBlanc, on the other hand, had never served at the altar.

"Getting to the point where I could say 'yes' to the Lord and 'yes' to the priesthood took a lot," Deacon LeBlanc said.

He said that when he first began thinking about the priesthood, he had "an inkling" that God wanted him to go to the seminary. He ignored the call initially, but as time went on, it grew stronger until he had to acknowledge it in prayer.

"I said, Lord, if you want me to go to the seminary, you're going to have to give me that desire, because I don't have the desire for priesthood," Deacon LeBlanc said.

After graduating, he spent two years working in BU's campus ministry, "giving back to the Catholic Center, which had done so much for me."

Those two years were also the first years that Father David Barnes worked at the Catholic Center. He helped Deacon LeBlanc in his discernment and encouraged him in his vocation.

"The most important thing that I saw from him was the joy that he had for the priesthood," Deacon LeBlanc said.

One day, while praying during his drive to work, Deacon LeBlanc made an "interior surrender to the Lord's will." When he did that, he said, he felt an "immense peace and joy that the Lord had given me."

"I have that same peace and joy about my vocation today, six years later," he said.

He believes it was through grace and prayer that God helped him to desire the priesthood, even more than having a natural family.

"That could only be God's grace working in my life," he said.

Deacon LeBlanc attended St. John's Seminary and was assigned to St. Paul Parish in Cambridge for his deacon year.

"As a deacon, it's been a great joy to be with people, and celebrate marriages, and some of the most joyful moments of their lives, but also to be with them in times of suffering," he said.

His assignment has involved ministering to not only the parish but also the Harvard Catholic Center and the St. Paul Choir School.

"It's been great to be a part of the beautiful liturgies that they have here at St. Paul's and getting to experience the boys' singing every week," Deacon LeBlanc said.

Looking ahead to ordination, he said, "what I'm most looking forward to is bringing people the sacraments, bringing people Christ, and knowing that it's not me but Jesus working through me and me just being his instrument."

To those considering a religious vocation, he offers this advice: "Be open to the Lord's will in your life. Whatever the Lord is calling you to is what is going to make you most happy and most fulfilled."

"It takes a surrender to the Lord to know his will for you and to be able to get to that point where you can really mean it and tell the Lord that you'll do whatever he asks. That's what it took for me, and that's what I would encourage others to do as well," Deacon LeBlanc said.