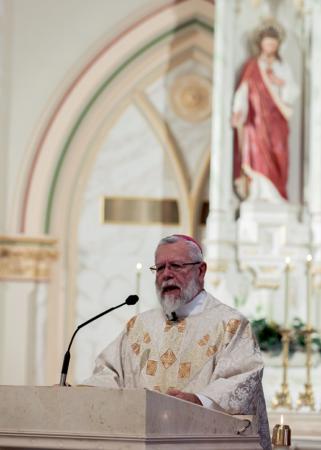 Rockville Centre, N.Y. (CNA) -- Bishop Peter Libasci has been accused in a lawsuit of committing sexual abuse while a priest in New York during the 1980s.

The Bishop of Manchester is accused in a July 14 lawsuit of abusing a male youth on numerous occasions in 1983 and 1984. Bishop Libasci has not spoken out publicly on the allegations, but the Diocese of Manchester says the matter has been reported to civil authorities.

The anonymous alleged victim, an altar boy who would have been in his early teens, was a student at Saints Cyril and Methodius School in Deer Park, New York, which has since merged with another school. The lawsuit also names the Sisters of St. Joseph, an order which ran the school, claiming they were negligent in allowing the alleged abuse to occur.

The Manchester diocese told the Associated Press in a statement that it was aware of the lawsuit and that the matter had been reported to civil authorities, but that Libasci's status as bishop has not, for the moment, changed.

The diocese did not respond to CNA's request for further comment.

Bishop Libasci was a priest of the Diocese of Rockville Centre at the time of the alleged abuse, having been ordained in 1978. The Rockville Centre diocese is one of several in New York that have recently filed for bankruptcy amid a flood of lawsuits.

In a 2002 agreement, in return for the the state of New Hampshire agreeing not to prosecute the diocese as an institution or any individuals for their past handling of sexual abuse allegations involving clergy, though county attorneys still can pursue individual prosecutions, the diocese agreed to new policies on sexual abuse and to periodic audits of those policies, the AP reported.

Before his 2011 appointment to lead the Manchester diocese, Bishop Libasci was an auxiliary bishop of Rockville Centre, having been consecrated in 2007.

Sean Dolan, spokesman for the Rockville Centre diocese, told CNA that because the allegations involve a current diocesan bishop, the diocese has informed the Holy See of the accusation, in keeping with the norms of Vos estes lux mundi, Pope Francis' 2019 document which governs procedures regarding accusations against bishops.

A spokesman for the Boston archdiocese told the NH Reporter that no Vos estis investigation has yet begun, and referred further questions to the Vatican.

"Following its standard protocol, the Diocese of Rockville Centre also reported the matter to the Suffolk County District Attorney," Dolan told CNA in a statement.

"The Diocese of Rockville Centre remains committed to the ongoing work of creating a safe environment in the Church."

The Rockville Centre diocese filed for bankruptcy in October 2020. Several other New York dioceses including Rochester, Syracuse, and Buffalo have also declared bankruptcy.

The passage of the Child Victims Act in New York in 2019 allowed for sex abuse lawsuits to be filed in past cases in which victims had not yet taken action, long after the statute of limitations had expired. The CVA originally created a one-year window for these lawsuits to be filed; the window closes next month, and hundreds of lawsuits have since been filed.