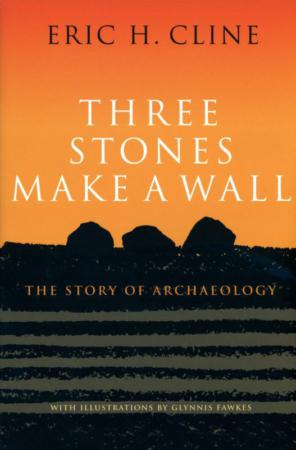 This is the cover of "Three Stones Make a Wall: The Story of Archaeology" by Eric H. Cline. The book is reviewed by Nancy L. Roberts. (CNS)

Some 3.6 million years ago in what is now Laetoli, Tanzania, three "hominins" (ancestral humans) walked across fresh ash from a volcano, leaving footprints that the archaeologist Mary Leakey discovered in 1978-79. She and her team identified about 70 such footprints, extending for nearly 90 feet.

Two of the three hominins, all judging from their strides to be less than 5 feet tall, seemed to be walking side by side. As the volcano in the distance spewed ash and smoke, the sun must have dimmed or even disappeared. Intriguingly, the footprints' imprint indicates the trio was not running but walking.

Such is the stuff of archaeology, a fascinating science that deciphers myriad, often minute clues to tell us the story of our origins. Through rigorous, systematic investigation of the likes of pottery shards, stone tools, post molds and fossilized bones, archaeologists uncover and help us preserve our past.

Of course, archaeology itself, as a study of such artifacts, has a significant past, and that's exactly what Eric H. Cline explores in this stellar global history of the field. He covers a range of archaeologists and sites from the pyramids and Pompeii to Stonehenge, Mesa Verde and Machu Picchu.

Eminently qualified for this undertaking, Cline is a professor of classics and anthropology at George Washington University, where he directs the Capitol Archaeological Institute. He has spent more than 30 seasons in the field, excavating and surveying in Greece, Crete, Cyprus, Egypt, Israel, Jordan and the United States.

And he is a superb storyteller, skillfully dramatizing legendary discoveries. Typical is his account of the opening of King Tut's tomb:

"On Nov. 26, 1922, Howard Carter peered into the tomb of King Tutankhamen for the very first time. He squinted, trying to see through the small opening that he had made, the only light coming from the candle that he was holding in his outstretched hand. He found himself looking into a room crammed from floor to ceiling with many kinds of objects, including items of gold; everywhere there was the glint of gold. The Earl of Carnarvon, who had underwritten the cost of the dig, tugged on Carter's coat and jumped up and down with impatience. 'What do you see? What do you see?' he demanded. Carter answered, 'I see wonderful things.'"

Cline's description of the Roman Coliseum hits all the senses: "Think of the smells clamoring for priority in your nostrils, from sweat to blood to the stench of 50,000 unwashed bodies packed into the amphitheater; taste the dust in your mouth, stirred up into the air from the action in the arena; imagine the deafening roar of the crowd, so loud that you can't hear the person next to you; feel the people on either side, packed in so close together that your arms and legs are touching for their entire lengths."

Cline notes that no one knows for sure if Christians were actually thrown to the lions in the Coliseum, but Pope Benedict XIV in 1749 declared it to be a martyrs' shrine.

Particularly compelling is Cline's account of the discovery of the Dead Sea Scrolls at Qumran, in a chapter on biblical archaeology. The extremely hot, dry climate of the caves on the cliffs by the Dead Sea where they were found enhanced preservation, but the famous Copper Scroll's papyrus could not be unrolled.

The solution was to cut it into 23 sections with a high-speed saw, allowing it to be reassembled much like a jigsaw puzzle. Cline's discussion of the Qumran scrolls sheds light on Jewish sects in the time of Jesus. The scrolls reveal much about the Hebrew Bible and, in fact, among them are our oldest copies of it.

The book interweaves the field's history with explicit, instructive information about its practices. The questions archaeologists are asked most often, Cline writes, are these: "How do you know where to dig? How are excavations actually done? How do you know how old something is? Who gets to keep what is found?" He makes it a point to address all of these.

We learn, for example, that the archaeologist's toolkit includes not only picks, shovels and wheelbarrows, but handpicks, trowels and even dental tools and toothbrushes "for extremely delicate work, such as excavating skeletons and other organic features that include seeds, nuts or animal bones."

Above all, Cline writes, archaeologists take extreme care not to just "yank anything out of the ground when it first starts appearing," but to preserve its context. Where the object's bottom rests is more diagnostic than where its top is, because this may tell us, for example, if the object is sitting on a floor -- which might lead to further important information about its purpose and how it was used.

Cline includes up-to-date information about how ancient artifacts are dated, such as the commonly used radiocarbon method. Another is thermoluminescence, which can reveal the age of a clay object such as a pot "by measuring the amount of electromagnetic or ionizing radiation still in it," which indicates when it was last fired in a kiln.

Newer and still experimental is rehydroxylation, a method that Cline explains can, through measuring the amount of water in a clay pot, reveal approximately when it left the kiln. This method relies on the cooled pottery's absorption of water from the atmosphere "at a constant, slow rate, regardless of the environment of the vessel."

The book's title refers to an archaeological axiom that "one stone is a stone; two stones is a feature; three stones is a wall." Cline's book underscores the excitement that archaeologists feel when they realize they're uncovering a line of stones that once formed a structure that someone put there eons ago.

The book is hard to put down, so engagingly written that it will appeal to a wide audience, but it includes all the requisite scholarly accoutrements such as extensive footnotes and detailed bibliography and index. Black-and-white drawings by Glynnis Fawkes are well rendered and consistently complement the text. Cline mostly keeps his tone light, but it's clear that he mourns the recent destruction of valuable archaeological sites in Palmyra and elsewhere owing to war in Syria.

Readers will be left with a trove of new knowledge about archaeology and also a sense of wonder that such seemingly mundane objects as stones, bones and pot shards can tell us so much about our forebears.

It is, after all, in these "small things forgotten" -- as the late archaeologist James Deetz titled one of his books about discoveries at Plimoth Plantation in Massachusetts -- that lie eloquent clues that reveal the story of human culture.

Roberts teaches journalism history and other courses at the State University of New York at Albany and has written two books about Dorothy Day and the Catholic Worker.