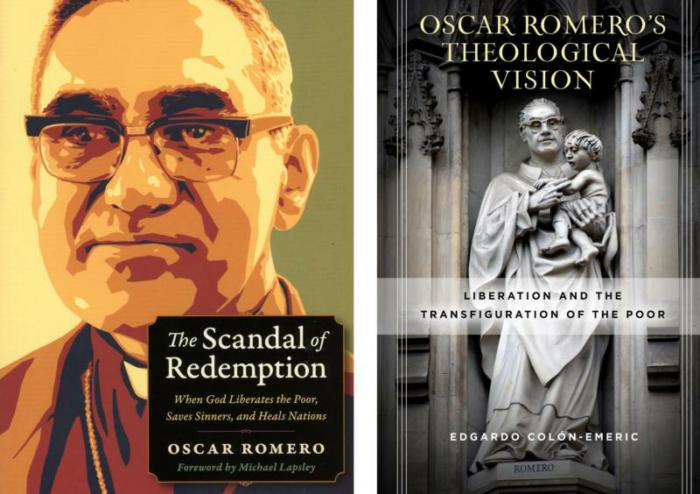 These are the covers of "The Scandal of Redemption: When God Liberates the Poor, Saves Sinners and Heals Nations" by Oscar Romero and "Oscar Romero's Theological Vision: Liberation and the Transformation of the Poor' by Edgardo Colon-Emeric. The books are reviewed by Agostino Bono. (CNS photo/courtesy Plough Publishing House and University of Notre Dame Press)

The canonization last October of St. Oscar Romero renewed attention, after almost 40 years, on the Salvadoran archbishop who may well be Latin America's first martyr to Catholic social teachings. The 62-year-old churchman was assassinated March 24, 1980, by a pro-government hitman while celebrating Mass in the chapel of a small hospital where he lived.

St. Oscar Romero, a humble and peaceful man, had used his platform as a bishop and later archbishop of San Salvador, El Salvador, to identify with the nation's majority poor and denounce the authoritarian, repressive policies of the military government, including the killings of priests and church workers.

His murder was a question of when, not if. He had anticipated it and it came as a shock but no surprise to his national and international followers. He did more than press the government to respect human rights and improve living conditions for the majority poor. He asked soldiers to disobey orders that violated the rights of citizens. As the most important church figure in a predominantly Catholic country, his voice carried weight.

The saint's activities came at a complex, nuanced and critical time in Salvadoran history. The country was in a civil war with Marxist rebels fighting the military, making it easy for the government to brand critics as communist subversives or stooges. Adding to this, other Salvadoran bishops did not support him. Internationally, the Cold War was in full blast and the United States was actively encouraging military governments in Latin America as needed bulwarks against the region's infiltration by the Soviet Union or its fellow travelers.

Interestingly, Archbishop Romero was declared a saint by Pope Francis who as Jesuit Father Jorge Bergoglio lived under a military government in his native Argentina at the same time. During a 2015 beatification ceremony, the pope declared the future saint a martyr killed in hatred of the faith.

These two books present the martyred saint to a new generation, taking different approaches. "The Scandal of Redemption" is direct testimony, excerpting from his sermons, talks, documents and diaries the key passages that explained his spiritual and temporal messages in troubled times. "Oscar Romero's Theological Vision" is academic, dissecting the saint's words to understand how his thoughts fit into the broader context of Catholic theology.

The former is the better book. It lets the saint speak for himself. His was an applied theology. He started with the Bible and interpreted what that meant to contemporary Salvadorans. For support he leaned on the church's rich theological history, from the church fathers of early centuries to contemporary liberation theologians.

His sermons state that the spiritual and temporal are intertwined. A key principle was that situations of sin also exist in unjust social, political and economic structures. Another was that the church's earthly role was to help people to be more rather than to have more so they can positively contribute to the well-being of their neighbor and the community at large and achieve eternal salvation. The excerpts are short, suitable for arranging into daily readings.

The other book is well researched and filled with academic depth, perhaps too much to pinpoint the saint's impact on his times. Author Edgardo Colon-Emeric, assistant professor of Christian theology at Duke University, exerts much effort fitting Archbishop Romero's thought into 2,000 years of Christian theology. The result is tiny islands of insight surrounded by oceans of scholarly theological dissertations.

Yet the insights are pertinent as when the author notes that Archbishop Romero was declared a martyr in hatred of the faith but was ordered killed by people professing Catholicism and under a military government claiming its violent policies were needed to defend the country's Catholic faith and culture.

As both books make clear, he was killed because of his advocacy of Catholic social justice teachings and for taking the government to harsh task for violating these.