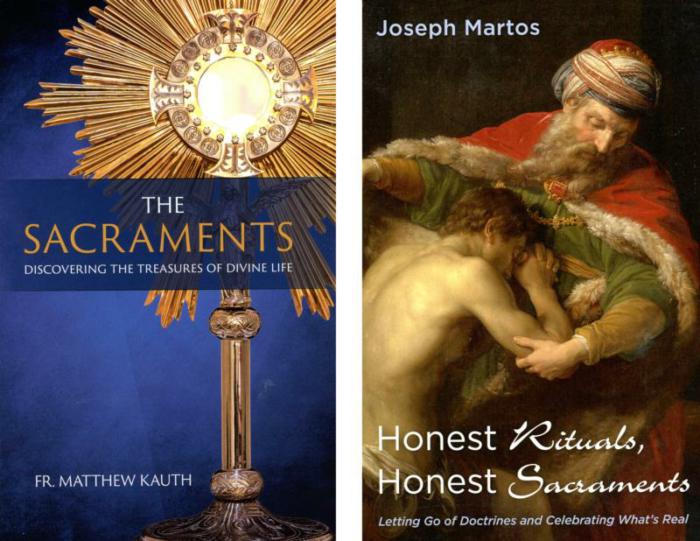 These are the covers of "The Sacraments: Discovering the Treasures of Divine Life" by Father Matthew Kauth, and "Honest Rituals, Honest Sacraments: Letting Go of Doctrines and Celebrating What's Real" by Joseph Martos. The books are reviewed by Kathleen Finley. (CNS)

There are few topics more important to Catholic life than sacraments, and these three books are all intended to help explore this underexamined area of our faith. They present a wide variety of approaches and various levels of helpfulness to examining these seven key experiences of God's grace.

In "The Sacraments: Discovering the Treasures of Divine Life" Father Matthew Kauth, rector of a college seminary in Charlotte, North Carolina, presents a highly philosophical and technical approach to sacramental life, attempting rather unsuccessfully to make it accessible to a general reading public. For example, he explains, "the sacraments employ matter which have a symbolic meaning, and yet, with the words or formula that is added to them, a further signification is given to them. Sacraments have both something material as well as verbal, a 'formula.' They each signify something. The verbal sign gives a further signification to the material sign."

As Father Kauth discusses the elements, the effects and the fruits of each sacrament, he often presents a rather narrow perspective, sometimes using Latin terminology and missing some important pastoral implications. For example, his examination of marriage is not at all adequate on the importance of mutual submission for a couple. And at times he confuses piety with good theology, concluding that engaging the sacraments must be Marian, for example.

The second book takes a considerably different approach to sacramental rituals. Joseph Martos is a name long associated with the topic, having written the well-loved classic "Doors to the Sacred: A Historical Introduction to the Catholic Sacraments," among others. In the book "Honest Rituals, Honest Sacraments" he also explores the impact of history on our present rituals, but with a different conclusion.

After using his philosophical background to explore topics of myth and ritual as well as symbols, meaning and metaphor, he explains his thesis: The rituals that we are currently using in the church worked as long as Catholicism retained its medieval cultural form, until the mid-1960s. But since the Second Vatican Council, he contends, our rituals as they exist are no longer adequate. "It does no good for the Catholic Church to cling to a ritual theory that is based on medieval practices and that relies on Aristotelian science. Catholic experience today is not the same as Catholic experience in the Middle Ages. And no one today uses Greek metaphysics as a basis for ritual theory. It is time for a fresh start."

Many may not be convinced of his argument that life has changed so much that our sacraments have gotten disconnected from contemporary reality. However, he is helpful when he suggests that the sacrament of anointing should be able to be offered at times by those not ordained because many lay chaplains have access to those who are sick and suffering who may not be seen by a priest. But, whether you agree with him or not, Martos gives the reader much to think about as to what our sacraments mean in a world that is changing before our eyes.

In the face of this challenge Father Richard Leonard, a Jesuit from Australia whose focus has been largely on film and faith, seems up to the task in "Hatch, Match and Dispatch." He describes how the reception of the sacraments presents a uniquely teachable moment: "As good as many evangelization programs are, it is true that the times when most people come to church on our terms is for a hatching, matching, or dispatching, and many are open to hearing a hopeful word that speaks to the joy or sadness they bring with them. Indeed, it would be wonderful if the warmth of the welcome they receive as well as the attention to the dignity, beauty and flow of the sacrament might enable them to ask some of the deeper questions and seek the answers about life's meaning and the grounds for faith toward which the sacrament is already pointing and making real."

Father Leonard's book does a fine job in so many ways in exploring how each of the sacraments put us in touch with God's grace in the midst of a community of faith. His book is clear about each sacrament, with a clear historical perspective as well as pastoral realism and a sense of humor, like the story of when he fainted at his own ordination.

Each chapter helps us to see the rite itself with specific practical suggestions on how it can be celebrated well. It also focuses on how to live the sacramental reality long after the ritual is over. For example, to help married couples get the support they need to live a lifelong, faithful marriage, he says, "I always challenge wedding congregations to go home and circle our calendars on that first anniversary of the couple with the intention that the couple receive, one year on, as many cards, calls, text messages and emails as they did on their wedding day." He explains that not only does this encourage the couple but also reminds everyone that all the sacraments belong to all of us.

"Hatch, Match & Dispatch" also helps readers make connections with contemporary culture and film for each sacrament, and the chapter on holy orders is especially well done, although not as strong as other chapters when it comes to its connection with cinema. Father Leonard, like Pope Francis, is passionate about being inclusive wherever possible with the sacraments. "Mind you, some priests overstep their authority and act as thought they 'own' the sacraments. We are ministers of what Christ is doing here, and within the boundaries of what we can possibly do and for the good order of the sacraments, we should be as generous to those who do not tick every religious box in the same way that Christ called, healed and included the same groups in his day."

These three books may be helpful for readers to see the sacraments in a renewed way.