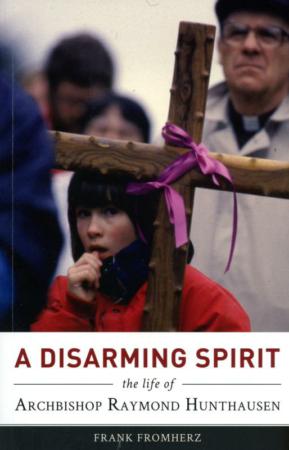 This is the book cover of "A Disarming Spirit: The Life of Archbishop Raymond Hunthausen" by Frank Fromherz. The book is reviewed by Rachelle Linner. (CNS)

This well-meaning, uncritical biography of Archbishop Raymond G. Hunthausen (1921-2018) is exhaustively researched, overly detailed and needlessly repetitive; Fromherz references every interview he conducted or document he read, and so much detail detracts from what is an inherently compelling narrative.

In tone, "A Disarming Spirit" comes close to being a hagiographic portrait of an archbishop formed by the ecclesiology of the Second Vatican Council and the struggles he faced implementing that vision under the papacy of St. John Paul II. The problem is that Fromherz conveys Archbishop Hunthausen's life in such a way that he becomes a stock figure in a morality play between good people and bad institutions, ending up with a less interesting book than it could have been.

That is not to imply that the former Seattle archbishop was not a good and decent man. He undoubtedly was, and his eventful life is accurately described by the titles of the book's three sections. The first, Conscience, details Archbishop Hunthausen's opposition to nuclear weapons and militarism. Courage focuses on his struggle with the Vatican's secret investigation and the humiliation of having his authority curbed. The final section, Character, discusses the formative influences of family, Montana, religious vocation and Vatican II.

The book opens with Archbishop Hunthausen's principled opposition to the Trident missile program ("the Auschwitz of Puget Sound") and his thoughtful rejection of nuclear deterrence, which led him to withhold half of his federal income tax as a protest against nuclear weapons. This was a challenging act of conscience in a diocese that was economically dependent on military spending and where Boeing was a major employer. "The issue of whether the human family would destroy itself through nuclear war was the greatest spiritual crisis humanity had ever faced," he writes.

Archbishop Hunthausen acted with an awareness of his responsibilities as a bishop. The author says he "tried to balance the call of personal conscience with his responsibilities as the symbol of unity. As an official religious leader, the stand he took could potentially be more influential than if he were not in such a role. But the call of personal conscience, even though it was intended to further the common good, could often collide with the desire for unity."

Courage, the middle section of the book, describes the Vatican's harsh and punitive treatment of Archbishop Hunthausen over his doctrinal leadership, the disappointing lack of support by fellow bishops, and the need to accept a coadjutor bishop (then-Bishop Donald Wuerl, now retired cardinal) with authority in five key areas. The author says Archbishop Hunthausen "never fancied himself a rebel engaged in a direct power struggle with the Vatican. If he was ever angry about the actions of the Holy See, he did not express it."

Fromherz discusses the many nuances of this issue, including models of religious authority, doctrinal consistency, and Archbishop Hunthausen's collaborative decision-making. In a number of places, he raises the possibility that Archbishop Hunthausen's anti-nuclear stance -- not the way he administered his archdiocese -- prompted the investigation. He quotes several sources who suggest there was collusion between the Reagan White House and the Vatican and although he admits that there is no hard evidence for such a theory, he has a hard time letting go of the idea.

Fromherz's consistent need to lionize Archbishop Hunthausen means that he offers only tepid criticism of his inaction on pedophilia. "It would be unfair to judge him entirely by the expectations and knowledge base that we have available to us on the issue at the present time. On the other hand, it appears that it in this area of his ministry, he did not take action as early and as forthrightly as he could have, and it also appears clear that he has acknowledged the pain such hesitancy and priest-to-priest compassion has caused to those who have been abused."

It might have been more coherent for the book's final section, Character, to be the first. It was Archbishop Hunthausen's character, after all, that led him to the conscience and courage that informed his public life.

And although it is outside the scope of a sociologist and biographer to shed light on his subject's spiritual life, one of the loveliest lines in the book is the archbishop's response to being asked how he was coping after a serious stroke in the summer of 2013: "Well, I just sit in my chair and let God love me."

"A Disarming Spirit" would have been a better book if its author had adopted a modicum of that lucid simplicity.

Linner, a spiritual director, freelance writer and reviewer, has a master's degree in theology from Weston Jesuit School of Theology.