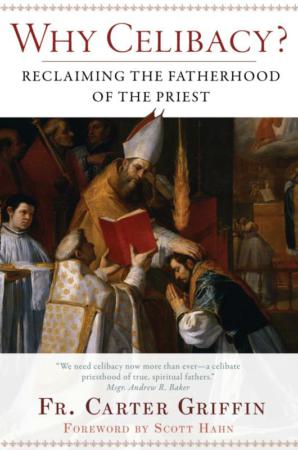 When reading Father Carter Griffin's book "Why Celibacy?" this summer, I repeatedly had to close it and think of my father.

It may seem odd that my first (and repeated) personal reference while reading a book about celibacy was of a married man with five children.

I think of my dad every day, of course, these 26 years after his death. But when reading Father Griffin's book, I had to put it down a lot to think of my dad.

Father Griffin, the rector of St. John Paul II Seminary in Washington, has written a book that takes us deeply into the subject of clerical celibacy, but it also is a reflection on spiritual fatherhood.

"Why Celibacy" traces a path through the depths of sacred Scripture, the fathers of the church, the scholastics and modern scholars to tell the story of how genuine, freely chosen celibate love generates a celibate spiritual fatherhood that is always new and never grows tired. Celibacy is a generous response to a supernatural fatherhood in the order of grace. Grace builds on nature ... and so, while reading these pages on the supernatural capacity of celibate love, I naturally thought of my dad.

My dad lifted burdens -- from the backyard, to work, to family life. He lifted burdens I can only now begin to understand, a quarter of a century after he died. He gave things up, and he loved his wife and children to the point that sacrifice and endurance were cruciform ways of life for him. He didn't cut corners. He refused himself a lot. He made no excuses, and he had a father's wisdom.

When reading Father Griffin's book, I thought of how my dad taught me about the light -- to get up early in the morning and begin the day as the sun came up, because "an hour in the morning is worth two at night." Watch for the light, he'd say. Don't cut corners.

Father Griffin's work doesn't cut corners either. "Why Celibacy?" takes the reader in an accessible way along academic theological foundations and illumines with precision the vital link between celibacy and fatherhood.

From there, Father Griffin's book guides us to the light, away from the traps of clericalism, narcissism (and its undernoted calling card, delusional grandiosity) and similar detours, to show us how important formation for celibacy is in seminaries. And it is here that "Why Celibacy?" can make its contribution.

The book is helpful as a launching pad -- providing a new beginning to reconsider fatherhood from deeper places. The four areas of priestly formation come to mind: the intellectual, the spiritual, the pastoral and the human. An indispensable next step to Father Griffin's book, across the field of formation in seminaries and ongoing formation, is to further develop human formation for celibacy from an emotional perspective. That is, to do human formation for healthy and holy celibacy emotionally, as well as intellectually, spiritually and pastorally. Grace builds and transforms on nature; it doesn't supplant it or override it.

This work leads to reflection on many aspects of the celibate life, including when things go wrong. It seems that, along with significant spiritual causes, a repeated major contributor to terrible scandals and betrayals lies deep along the fault line of men who promised celibacy but made a choice not to live chastity on a mature human, emotional level. They found themselves living a double life. And it is not likely that this double life arose simply due to a deficient intellectual understanding of celibacy or chastity.

The double life arose because of a pronounced deficit of human formation for celibacy on an emotional level. This absence gave systematic license to a life of impulsivity around emotional triggers even while the perpetrators may have portrayed an academic understanding of celibacy. These men simply could refuse themselves nothing.

A double life doesn't begin overnight as a double life. It begins early as a series of incremental failures. And the fuel of a double life is the repeated inability to navigate emotional triggers and to talk oneself (and others) into compromises and excuses that somehow the compromises are OK. They're not.

Father Griffin reminds us why. He reminds of healthy men who lived their vocation well -- those married men, celibate men and mentors. He reminds us of the light. For that we owe him a debt of gratitude. He reminded me of my father. For that I am very grateful.

Msgr. Bransfield is the author of "The Human Person: According to John Paul II" and is general secretary of the U.S. Conference of Catholic Bishops.