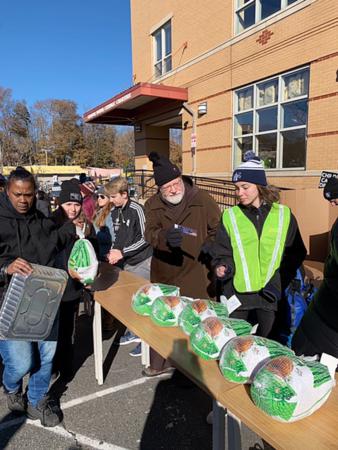 On the Saturday after Thanksgiving, Cardinal O'Malley joined Catholic Charities and the United Way at the Yawkey Center to distribute thousands of Thanksgiving meals to needy families throughout the area. Pilot photo/CardinalSeansBlog.org

On Thursday evening, I went to the Harvard Club in Boston for a dinner in honor of Dr. Lorenzo Berra, who has been appointed to the Reginald Jenney Associate Professorship at Harvard Medical School/Massachusetts General Hospital, in recognition of his achievements in the research and practice of anesthesia. The award ceremony was directed by Dr. Jeanine Wiener-Kronish, chief of anesthesia at Massachusetts General Hospital.

Dr. Berra is from Milan and a member of the Memores Domini, the lay association of the Fraternity of Communion and Liberation. The members of Memores live in community with the vocation to practice the Evangelical Counsels together and in their daily life, with a particular commitment to provide an example of Christian charity and love in and through their work. The appointment was an honor for Dr. Berra and a source of great joy for his friends and colleagues and who hold his professional expertise, friendship, and Christian integrity as among their most valued gifts.

It was very encouraging to see a young Catholic doctor who is so talented and has done so much in the area of research recognized with this very important post. Of course, Harvard Medical School is one of the most important medical schools in the world, and so, having someone there with the ethical standards, passion for healthcare, and care for people that Dr. Berra possesses, I think is wonderful.

Each year, Catholic Charities, in conjunction with the United Way, distributes thousands of Thanksgiving meals to needy families throughout the area. I was very happy to join them for the distribution this year at the Yawkey Center on Saturday morning.

Those from New England know that, at this time of year, there is always the risk of freezing temperatures, rain or snow (or all three!), but we were blessed this year with a crisp, sunny day.

I was so happy to be able to join the many volunteers, including students from our Catholic schools, in this annual tradition.

Wedding of Luca and Erica Hickman

That afternoon, I went to Mary Immaculate of Lourdes in Newton to celebrate the wedding of Luca and Erica Hickman. They are members of the Order of the Holy Sepulchre and are both very active in the pro-life movement.

Erica is originally from St. Brendan Parish in Bellingham, so we were very happy to have Father David Mullen, the pastor of St. Brendan's, concelebrate with us.

It is always a joy to be able to celebrate the Sacrament of Matrimony. We wish Luca and Erica happiness and many blessings on their families and their life together.

On Sunday morning, I went to St. Thomas Aquinas Parish in Jamaica Plain to celebrate a Mass to mark the parish's 150th anniversary.

Because I knew I couldn't stay long following the Mass, I came a bit early so I could meet with some of the parish leadership beforehand.

It was a wonderful bilingual Mass.

We were joined by many Sisters of St. Joseph, who have a long history in the parish and, at one point, ran the parish school. We were also joined by some priests who were formerly from the parish.

The pastor, Father Carlos Flor, and the vicar, Father Andrea Povero, have organized many special activities to mark the parish's sesquicentennial year. For example, they had a basketball tournament for the young people, but they wanted to do something with the older people of the parish, as well. So, they made a video (cardinalseansblog.org), which they showed me. It is just fabulous!