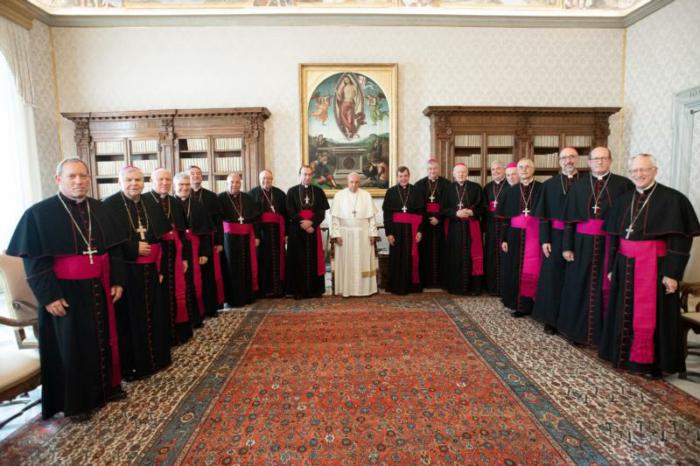 VATICAN CITY (CNS) -- The bishops of Ohio and Michigan spent two hours conversing with Pope Francis about their dioceses, about the sexual abuse crisis, the crisis' impact on priests and, especially, about ways to ensure Catholics really are "missionary disciples."

Seventeen bishops from the region met the pope Dec. 10 during their visits "ad limina apostolorum" -- to the threshold of the apostles -- to report on the status of their dioceses, meet the pope and the heads of Vatican departments and make a pilgrimage to the tombs of St. Peter and St. Paul.

Pope Francis made sure the group prayed for Bishop George V. Murry of Youngstown, Ohio, who could not make the trip.

Bishop Steven J. Raica of Gaylord, Michigan, told Catholic News Service there was an atmosphere of "great cordiality" with the pope showing the bishops where they could get water and where the restrooms were.

"We just had a conversation like you would have talking to your favorite uncle or your dad or an esteemed professor," the 67-year-old bishop said. "There was respect for us as we had for him."

"We sensed a real communion with him. Sometimes maybe the press gives the impression there's a divide between the pope and the U.S. bishops. We didn't get that sense at all," Bishop Raica said.

What was "really astonishing to all of us," he said, "was the breadth and depth of knowledge he had on a variety of different issues."

The topics raised "were all over the place," the bishop said. Every bishop or almost every bishop asked a question or made an observation. They discussed the sex abuse crisis, evangelization, women in the church, migration and the need to care for creation, especially given the region's forests and the Great Lakes.

For Bishop Raica, one of the most important topics was the relationship between bishops and priests, especially as priests continue to deal with the horror that some of their brothers have been abusers and with the suspicion some people now have of all priests.

"He said he's felt that himself a few times when he was serving as a priest and even as a bishop in Argentina," he said. "So, he understands that context."

But, Bishop Raica said, still the big focus for Pope Francis is on being "missionary disciples, that we are a church that is going out."

Pope Francis shared with the U.S. bishops the importance for him of St. Paul VI's 1975 document, "Evangelii Nuntiandi" ("Proclaiming the Gospel"), and of the Latin American bishops' 2007 Aparecida document; Pope Francis led the committee that drafted the document on evangelization in South America and the Caribbean.

Bishop Earl A. Boyea of Lansing, Michigan, agreed, telling CNS that since new evangelization is one of his diocese's priorities, he was going to go home and re-read the Aparecida document.

The key, he said, is "to help people have an encounter with Christ such that they want to go out and spread the good news."

Both bishops said the group also described for the pope what life is like in their dioceses with many far-flung rural communities and with their "industrial midland" urban areas that have declining populations, including declining numbers of Catholics.

This was Bishop Boyea's third "ad limina" visit; as an auxiliary bishop of Detroit, he made an "ad limina" with St. John Paul II in 2004 and as bishop of Lansing, he met Pope Benedict XVI in 2012.

Seven years ago, Pope Benedict "went around the circle and asked each bishop a question," he said. "This was looser, more free-flowing" and at least twice as long.

In the end, he said, "I had the distinct impression that he really appreciates what we do, all our ministries."