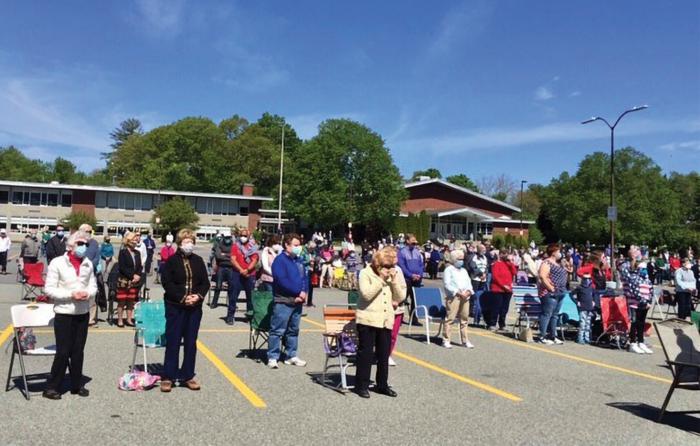 On Tuesday, May 26, Cardinal O'Malley held a webinar for priests to hear the experiences of some of the parishes that opened on the weekend of May 23-24. One of those experiences was from Father Jim DiPerri, who talked about the outdoor Mass they held at Our Lady Comforter of the Afflicted in Waltham. Pilot photo/CardinalSeansBlog.org

This past Sunday, a number of our parishes in the archdiocese opened again for the first time since March. Some of the most successful were places where the Masses were celebrated outdoors, such as at Our Lady Comforter of the Afflicted in Waltham, St. Patrick's in Lawrence, and Immaculate Conception in Marlborough.

But, at the cathedral we are not opening until Pentecost weekend, so our Sunday Mass was the televised Mass.

We will continue to celebrate televised Masses even once we have resumed our public Masses, in order to make sure that vulnerable people and those who are unable to come to Mass still have an opportunity to participate at home.

This week, I continued my meetings with classes of seminarians. On Sunday, I met with the second-year, pre-theology class, and on Thursday, I met with the first-year, pre-theology class. With these, I have now had an opportunity to meet virtually with each of the seminary classes. It has been very encouraging to hear how well they are coping during the pandemic and participating in the life of the parishes. Many of them mentioned that they were involved in helping with the livestreaming of liturgies and Masses, setting up online meetings and the like.

Monday was, of course, Memorial Day. For obvious reasons, there were no large gatherings or other activities at the cemeteries, but we trust that people prayed for and remembered all those who gave their lives in service to their country. And, in these days, we also hold up in prayer all those who are fighting the pandemic and putting their lives at risk to care for those who are ill and those who are in nursing homes.

Bishops of the Boston Province

On Tuesday, we held an extraordinary meeting of the bishops of the Boston Province -- the four dioceses of Massachusetts, New Hampshire, Vermont, and Maine. Typically, we meet only twice a year, plus a gathering for our summer retreat. The purpose of this special meeting was to share information about the pandemic. We spoke about our plans for reopening, best practices and ideas around how to safely administer the sacraments, and how to launch a reopening of our parishes in a staged and prudent way.

On Tuesday afternoon, we had a webinar for priests, during which we heard the experiences of some of the parishes that opened on the weekend of May 23-24, as well as some that are still in the process of planning and preparation.

I was also talking with Father Wellington Oliveira from St. Joseph Parish in Lynn about their experience. They had extra Masses over the course of the weekend and held celebrations simultaneously in the church and the parish hall to accommodate the number of people who came while maintaining social distance.

Only about one-quarter of our parishes opened last weekend, and we are encouraging the remaining parishes to take the time that they need. Although the government is allowing for 40 percent occupancy of our churches, that is also conditioned on maintaining social distancing of 6 feet. In most churches, once you measure that out, it is significantly less than 40 percent of the permitted occupancy that can be safely accommodated at the liturgy, and there are many other requirements, as well. All of this requires careful preparation, and I think hearing the experience of the parishes that are in the process of opening is helpful to those that are still in the planning stages.