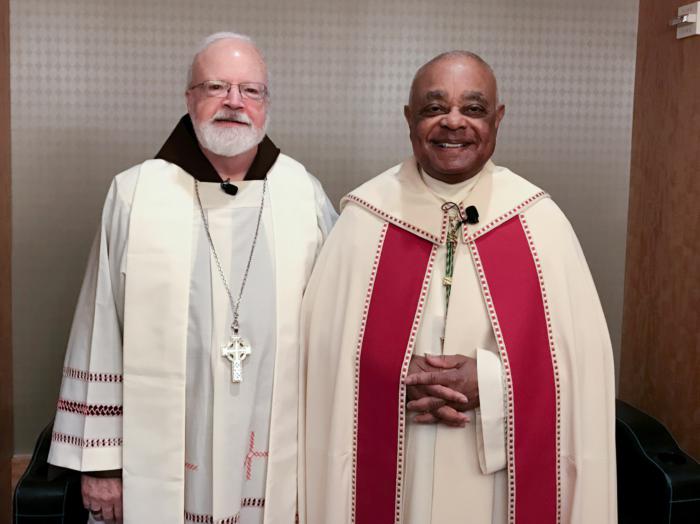 Cardinal O'Malley is pictured with Archbishop Wilton Gregory in 2018.

(Cardinal Seán P. O'Malley issued the following statement Oct. 27. Pope Francis announced on Oct. 25 that Archbishop Wilton Gregory of Washington, D.C., would be among those elevated to cardinal in November.)

Pope Francis's elevation of Archbishop Wilton D. Gregory of Washington, D.C. to the College of Cardinals is an historic event, a personal tribute and a blessing for the Church in the United States.

The Holy Father's choice, of course, is not simply about history. It is a recognition of the personal qualities and fruitful pastoral ministry of Cardinal-elect Gregory. Ordained as an auxiliary bishop for the Archdiocese of Chicago, then Bishop of Belleville, Illinois, Cardinal-elect Gregory later led the Archdiocese of Atlanta for more than fourteen years, before being appointed to the See of Washington, D.C. in 2019. He also served as the President of the United States Conference of Catholic Bishops from 2001-2004.

The long and valiant struggle for racial justice in this country from the 17th century to the inspiring events of 2020 has been given a powerful acknowledgment by the Holy Father whose voice for social justice, human dignity and equality has been a hallmark of his papacy.