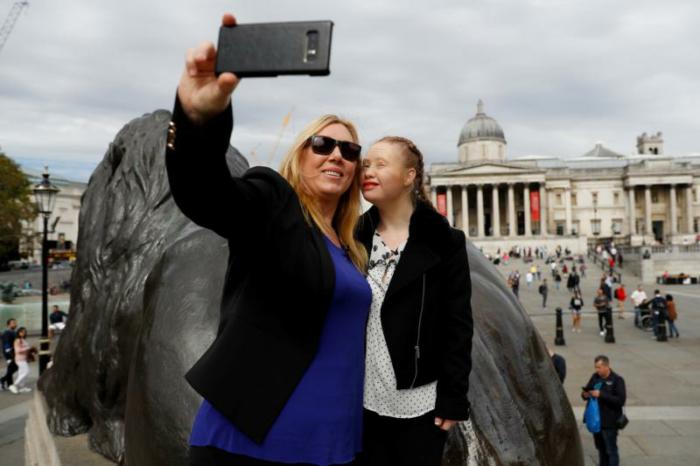 Australian model Madeline Stuart, who has Down syndrome, poses for photographs with her mother, Rosanne, while sightseeing in Trafalgar Square in London Sept.16, 2018. Heide Crowter, 24, of central England, will take the British government to court in an attempt to change a law that permits abortions up to birth of children considered to be "seriously handicapped." (CNS photo/Peter Nicholls, Reuters)

MANCHESTER, England (CNS) -- A woman with Down syndrome will take the British government to court in an attempt to change a law that permits abortions up to birth of children considered to be "seriously handicapped."

Heidi Crowter, 24, says it is wrong to treat unborn children differently because of perceived disabilities.

"At the moment in the U.K., babies can be aborted right up to birth if they are considered to be seriously handicapped," she said in a Feb. 23 statement emailed to Catholic News Service. "They include me in that definition of being seriously handicapped -- just because I have an extra chromosome."

"What it says to me is that my life just isn't as valuable as others, and I don't think that's right," she added. "I think it's downright discrimination."

Crowter, who lives in Coventry, has launched her legal action jointly with Cheryl Bilsborrow of Preston, whose 2-year-old son, Hector, has Down syndrome.

They hope to pay their legal costs -- including the 20,000 pounds ($25,845) required to initiate the case -- through an online crowdfunding appeal.

Both object to the provisions of the 1967 Abortion Act that permit abortions of healthy babies no later than 24 weeks' gestation but permit the abortion of disabled babies to term, including those with Down syndrome, cleft lip and clubfoot.

They want the High Court in London to rule that the Abortion Act "impermissibly violates the dignity of people with disabilities" as a precursor to the law being changed.

Crowter said she felt compelled to act after the government ignored advice from the U.N. Committee on the Rights of Persons with Disabilities to amend the law to ensure that babies with disabilities were not "singled out."

Lynn Murray of Don't Screen Us Out, a lobby group opposed to the abortion of disabled babies, said in a Feb. 23 media statement that abortions on grounds of gender or skin color would be "totally condemned" in the present political climate.

"But because it's a disability such as Down syndrome, that's somehow OK?" she said. "This is inequality, sanctioned, sponsored and funded by the state."

She added: "We live in a society which proclaims that we want to empower those with disabilities, and that regardless of your background, you deserve a fair and equal chance at life. We believe that our laws must reflect this narrative."

The latest figures from the Department of Health show that in 2018 there were 3,269 abortions on grounds of disability in Britain, of which 618 were performed because the babies were detected as having Down syndrome.

The figure represents a 42% increase in 10 years on the numbers of babies aborted for the syndrome, possibly arising from the introduction of early noninvasive detection techniques to replace amniocentesis.