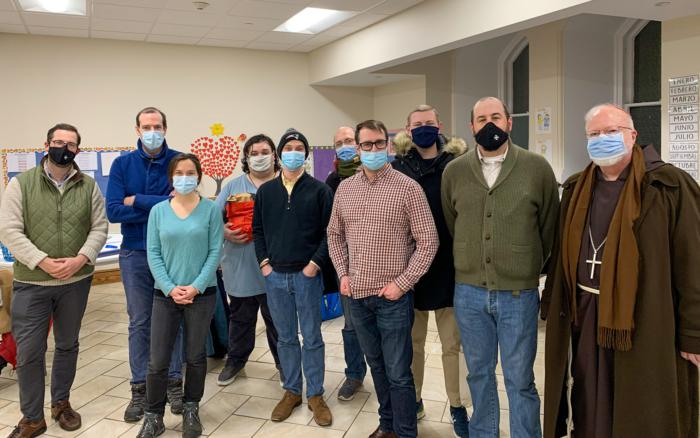 Cardinal O'Malley poses for a photo with a group of young adults from the Order of Malta. The group gathers every Wednesday evening at the cathedral for a Eucharist and then take food and essentials to homeless people living in the streets of Boston. Pilot photo/CardinalSeansBlog.org

We are pleased that on Monday, the residents and staff of Regina Cleri were inoculated against the coronavirus. This is encouraging because, here in Massachusetts, we are currently experiencing the post-Christmas surge in cases.

Currently, there are seven priests in the archdiocese sick with COVID-19. Since the beginning of the pandemic, 65 priests have contracted the coronavirus and six have died. That means 10 percent of those who became ill perished from it.

So, we are very hopeful that the arrival of the vaccines will be able to slow and eventually end the pandemic. The Holy Father himself received the vaccine on Thursday, and we are encouraging people to be inoculated as soon as they can.

Lent begins in less than a month, and so we are already beginning to plan. On Monday, we met with the auxiliary bishops and episcopal vicars of the archdiocese to prepare some ideas for the Presbyteral Council around plans for the celebrations of Lent and Easter in light of the pandemic.

At the Presbyteral Council meeting on Wednesday, we discussed many of the same topics -- how the blessing of the throats, the distribution of ashes, and the distribution of palms should be carried out, and how we should conduct the various liturgical celebrations that we will have in the upcoming weeks.

Helping during the pandemic

I was very pleased to see a lovely article in Wednesday's Boston Globe about Beth Chambers, which highlighted the extraordinary work that she and others from Catholic Charities are doing.

We are also very aware that much is being done in so many of our parishes to respond to the needs of people during the pandemic, particularly addressing food insecurity. Here in the cathedral, we have a group of young adults from the Order of Malta who gather every Wednesday evening for a Eucharist and then take food and essentials to homeless people living in the streets of Boston.

I was very happy to greet them Wednesday night, give them my blessing and thank them for their work.

Our Lady of Altagracia

Also, on Wednesday, here at the cathedral, Sister Sara began an online virtual novena for Our Lady of Altagracia, the title of Mary as Patroness of the Dominican Republic.

I've always loved the image of Our Lady of Altagracia. In fact, one year, I used it for my Christmas card. It's the only title of the Blessed Mother in which St. Joseph is included in the image. This year, being the Year of St. Joseph, I think that is a beautiful aspect of this devotion.

I only visited the Shrine of Our Lady of Altagracia once, which is located in Higuey, about 20 miles from Santo Domingo. At the time, I was bishop in the Virgin Islands.

I was attending a conference on Catholic universities in Santo Domingo with Cardinal Baum and Msgr. Lorenzo Albacete, and we were invited by the Bishop of Higuey to come to the shrine. When the president of the country became aware that we were making a visit, he put a helicopter at our disposal. I had never ridden in a helicopter, and I was very excited. When we arrived, they were having Mass at the shrine. There was a huge crowd of people in front of the Basilica, and they all scattered so the helicopter could land.

However, things didn't go so well on the return trip.

Msgr. Albacete, who was an aeronautical engineer before he became a priest, was sitting next to me in the helicopter. He tapped me on the shoulder and told me that we were running out of fuel. I chided him for even joking about such things, but he told the pilot, and sure enough, we had to make an emergency landing in a field.

Right nearby was a little hut with a family living in it, and they immediately came out served us coffee and cookies. (They treated it so matter-of-factly, like people were constantly dropping out of the sky into their field!) Fortunately, an hour or so later, the army came, picked us up and took us to the capital. It was a very memorable visit to the Shrine of Our Lady of Altagracia!