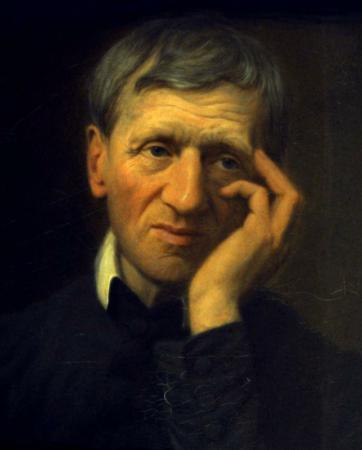 OXFORD, England (CNS) -- Thousands of documents relating to England's 19th-century convert-cardinal, Blessed John Henry Newman, are being released ahead of his Oct. 13 canonization, highlighting his role as a pastor and evangelist, said church experts.

Although 32 annotated volumes of the cardinal's letters and diaries have been published over the past five decades, the new material includes letters and correspondence to the future saint.

"Up to now, we've had only half his correspondence, with just fragments of letters he received, so this will greatly improve ... understanding of the complex issues he dealt with," said Paul Shrimpton, an Oxford-based expert on Newman's educational theories.

Father Ignatius Harrison, provost of Birmingham's Oratory of St. Philip Neri, said Cardinal Newman "wasn't just a lofty philosopher -- he was primarily a priest and prophet, who foresaw the difficulties facing Christianity in a secular world."

"He was loved in his lifetime not because everyone had read his academic masterpieces, but because of his pastoral kindness to the poor and sick, as these collections graphically illustrate," Father Harrison said.

The first of 250,000 folios of letters and photographs preserved at the oratory were published for the first time, under a digitization program co-organized by the National Institute for Newman Studies in Pittsburgh.

In a statement on its website, the National Institute for Newman Studies said its new interactive, online platform, launched in mid-August, would include handwritten papers and previously unseen manuscripts by Newman, as well as draft letters, prayer lists, notebooks and photograph albums totaling more than 40 terabytes.

It added that the database, including oratory material "hidden for over a century," would feature letters to the future saint both from ordinary people and key 19th-century figures such as British Prime Ministers Benjamin Disraeli and William Gladstone, and Cardinals Nicholas Wiseman and Henry Edward Manning.

Besides "revolutionizing the way scholars can access and study Newman," NINS said, the collection would "allow a greater audience to understand and appreciate Newman and his works on a more intimate level."

Shrimpton said the Cardinal Newman digitization program would encourage Christians to pray to the new saint by illustrating his pastoral work among "workers, servants and humble people."

Father Harrison said some hoped the opening of the archive would highlight Cardinal Newman's lifelong "quest for holiness" and advance calls for him to be declared a doctor of the church after his canonization.

"Newman was often misunderstood during his life, but I think his time has come now and he'll emerge in coming years as a major saint," Father Harrison told Catholic News Service.

Father Harrison said the impending canonization had generated a "huge surge of interest," accompanied by requests for relics and mementos from devotees around the world.

He added that a shrine to Cardinal Newman, who was beatified by Pope Benedict XVI in September 2010, was being restored at the oratory, where a museum of his personal effects would also open this fall.

John Henry Newman was raised in the Church of England, graduated and taught at Oxford University and served as vicar of its St. Mary's Anglican Church, 1828-1843.

Having co-led the 1830s Oxford Movement, which sought to revive the Church of England's pre-Reformation beliefs and rituals, he joined the Catholic Church in 1845 and was named a cardinal by Pope Leo XIII in 1879.

Besides the oratory, Cardinal Newman helped found a Catholic university in Ireland -- University College Dublin -- and was influential in Catholicism's revival in England after three centuries' repression and restriction.

He wrote poetry, hymns and novels, while his major works on church history, ecclesiology, the rights of conscience and role of laypeople are widely believed to have anticipated the 1962-1965 Second Vatican Council.