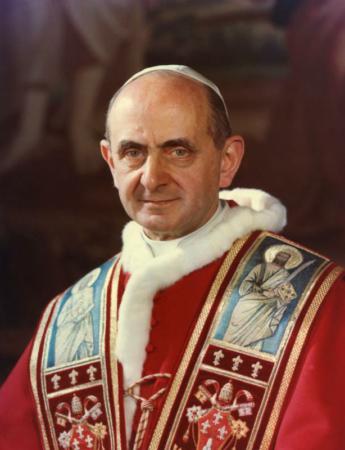 Blessed Paul VI will be canonized a saint in late October, said Cardinal Pietro Parolin, Vatican secretary of state, March 6. Pope Paul VI is seen in this portrait made in early 1969. (CNS photo)

ROME (CNS) -- Blessed Paul VI will be declared a saint in late October at the end of the Synod of Bishops on youth and discernment, said Cardinal Pietro Parolin, Vatican secretary of state.

After mentioning the late pope in a speech to the International Catholic Migration Commission March 6, Cardinal Parolin confirmed to reporters that the canonization will take place at the end of the synod, which is scheduled for Oct. 3-28. Pope Paul revived the synod after the Second Vatican Council.

The cardinals and bishops who are members of the Congregation for Saints' Causes reportedly voted Feb. 6 to recognize as a miracle the healing of an unborn baby and helping her reach full term. The baby's mother, who was told she had a very high risk of miscarrying the baby, had prayed for Blessed Paul's intercession a few days after his beatification by Pope Francis in 2014.

Blessed Paul, who was born Giovanni Battista Montini, was pope from 1963 to 1978.

Although Pope Francis announced in late February that he expected to canonize Blessed Paul this year, he still has not formally signed the decree recognizing the miracle needed for the celebration to take place nor has he held a consistory -- a meeting of cardinals -- to set the date for the ceremony.