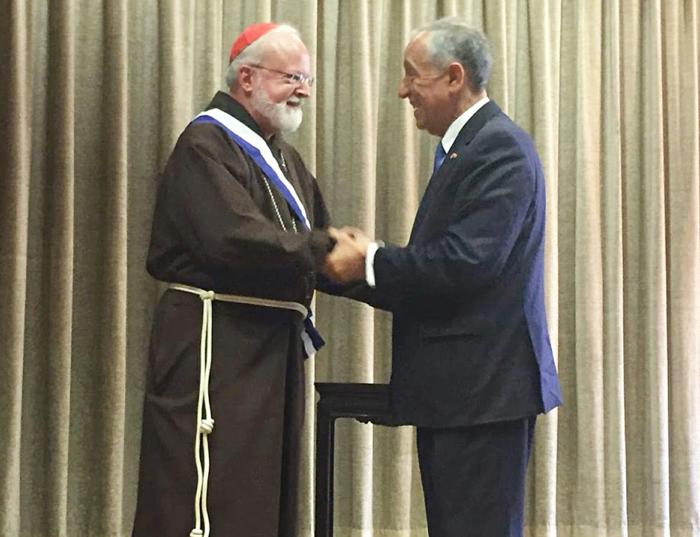 The president of the Portuguese Republic Marcelo Rebelo de Sousa presents Cardinal O'Malley with the Grand Cross of the Order of Prince Henry the Navigator at the Catholic University of Portugal in Lisbon June 28. Pilot photo/courtesy CardinalSeansBlog.org

BRAINTREE -- The Portuguese government presented Cardinal Seán P. O'Malley with its highest honor in recognition of his service to the Portuguese community.

The Grand Cross of Prince Henry the Navigator was awarded to Cardinal O'Malley by President of the Portuguese Republic Marcelo Rebelo de Sousa during a ceremony at Catholic University of Portugal in Lisbon, June 28, following an address given by the cardinal at the university as part of a conference on Pope Francis and the challenges of the modern-day Church.

Both the ceremony and the address were attended by hundreds of people, including the Cardinal Patriarch of Lisbon, a number of Portuguese Bishops, and the U.S. Ambassador to Portugal.

Reflecting on the experience in his weekly blog, the cardinal said, "I was very honored and, as I said at the ceremony, I accepted it (the award) in the name of all those Luso-Americans who have enriched my life as a priest and as a bishop."

The cardinal also said the honor was unexpected.

"I have to say I was blown away. Before I arrived, I thought I was going to deliver a talk to about 50 people in a classroom!" he wrote in his blog post.

In an email interview, the vice-rector of the Catholic University of Portugal, Isabel Capeloa Gil, described the Grand Cross of the Order of Prince Henry the Navigator as, "the highest class of the decoration given by the Portuguese State to honor 'relevant services to Portugal, to the dissemination of its culture, history, values and support for its citizens, both inside the country and abroad.'"

"The Cardinal had already been decorated with the 'Comendador' ('Commander') class of the same order, but has now received the highest decoration (Grand Order) given by the State of Portugal in recognition of his unique work," she said.

"The President said on this occasion that the Cardinal was being decorated in thankful recognition by the Portuguese State for his service in the support of Portuguese communities in the United States and for the support the Boston Archdiocese has given to the development of the Catholic University of Portugal," Capeloa Gil said.

The Catholic University of Portugal has long had a relationship with the Catholic Church in the United States, particularly the Church in California and Massachusetts, Gil said. Cardinal Humberto Medeiros had a supporting role in the 1967 creation of the university, and the auditorium where Cardinal O'Malley received his award is actually named after the former archbishop.