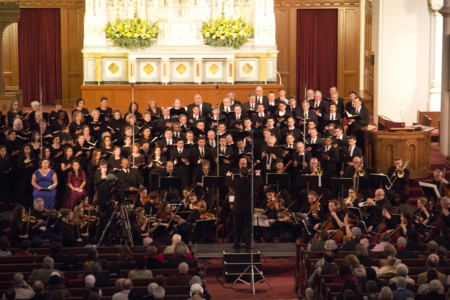 An orchestra and chorus, organized and sponsored by the Schiller Institute, perform Mozart's Requiem Mass at the Cathedral of the Holy Cross, Jan. 19. The performance was to commemorate the Pontifical Mass celebrated Jan. 19, 1964 for the assassinated President John F. Kennedy. Pilot photo/Christopher S. Pineo

SOUTH END -- When the Cathedral of the Holy Cross hosted Mozart's Requiem and Pontifical Mass on Jan. 19 1964 as a remembrance of John F. Kennedy, Boston commemorated the passing of one of her favorite sons in an intimate way.

Cardinal Richard Cushing presided as Boston mourned her fallen son -- at a less well-known event than the Nov. 25 state funeral at the Cathedral of St. Matthew the Apostle in Washington -- in an intimate atmosphere as the cardinal personally escorted Jacqueline Kennedy to the front pew of the Cathedral of the Holy Cross.

The Schiller Institute commemorated the requiem 50 years to the day, Jan. 19, with a presentation of Mozart's Requiem in D minor at the cathedral.

"It is urgent to evoke again the divine spirit of beauty of Mozart's composition in order to recreate in us the better world which both Kennedy and Mozart represent," said chairwoman and founder of the Schiller Institute Helga Zepp-LaRouche, before the concert began.

Interludes between pieces in the concert presented recordings of speeches from President Kennedy, at various times in his life.

"If sometimes our great artists have been the most critical of our society, it is because their sensitivity and their concern for justice, which must motivate any true artist, makes him aware that our nation falls short of its highest potential," the president said, in a speech at Amherst College in October 1963.

John Sigerson, who directed the concert, said that the concert hoped to expand people's awareness of the importance of the arts in a classical sense, by reminding people of the high social, moral and innovative standards embodied in the leadership of President Kennedy.

"What we in the Schiller institute are committed to doing is to raising classical music above mere entertainment, into something which can elevate the souls of every member of the American population and the world population," Sigerson said.

After the concert, former Boston mayor and former Vatican ambassador Ray Flynn noted the significance of the original requiem Mass with Cardinal Cushing a few months after the assassination of President Kennedy as Boston gathered for a more intimate goodbye for one of her own, after the state funeral.

"This was a tribute like no other, because you really felt you were in the presence of Kennedy, and the Kennedy legacy, and what he meant for Boston," he said.