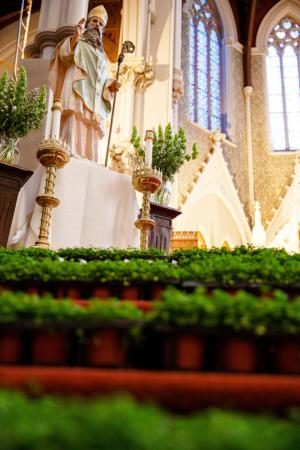 A field of shamrocks sits at the base of the statue of St. Patrick. Pilot photo/Gregory L. Tracy

SOUTH END -- A bagpiper and a harpist played traditional Irish melodies while a large statue of St. Patrick looked down at the crowded pews from beside the altar, setting an Irish tone at the St. Patrick's Day Mass at the Cathedral of the Holy Cross in Boston, March 17.

That tone was only bolstered by Irish hymns sung throughout the Mass and readings proclaimed in Irish and English.

Cardinal Seán P. O'Malley presided at the annual Mass for the patron saint of the archdiocese and St. John's Seminary rector Msgr. James P. Moroney served as the homilist.

In his homily, Msgr. James P. Moroney spoke about the passion St. Patrick had for God.

"Patrick's passion did not seek wealth or fame, or even sectarian advantage. Perhaps that's because Patrick's passion was first ignited in Sudbury, on the day he was kidnapped as a 16-year-old slave," he said.

Kidnapped from his home in Britain and brought to Ireland by pirates, St. Patrick was made to work as a shepherd for six years, until he escaped and fled back to his home.

However, he didn't stay in his home country for long. His passion for God inspired him to return to Ireland and preach, said Msgr. Moroney. He likened that fervor to the meaning of Lent.

"Now, I've always wondered why the liturgists of the Church placed the celebration of St. Patrick's Day in the season of Lent, particularly when the abstinence and corn beef too frequently meet each other on Friday, but today it makes real sense," he said.

"For Patrick's passionate perdurance is what Lent is all about. It's about the people who through invasion, persecution, and neglect have kept faith," Msgr. Moroney continued.

Following the homily Cardinal O'Malley made a special prayer for State Trooper Thomas Clardy, who was killed in the line of duty March 16, and a prayer commemorating the 100th anniversary of the Easter Revolution, the insurrection in Ireland to end British rule over the country.

The cardinal, who acted as the principal celebrant, also blessed small pots of shamrocks, which were distributed to attendees at the end of the Mass.

Julie Winslow attended the Mass with her best friend, and afterwards told The Pilot she was particularly struck by the readings in Irish.

She said that while she doesn't speak the language, her great-grandmother from County Cork did.

"I was trying to listen in and feel my ancestry," she said. "It was interesting to just listen and hear it spoken."

Colm Lydon, deputy superintendent of the Boston Police Department and who described himself as "very Irish," said he enjoyed the Mass.

"The Mass is beautiful -- it's obviously a celebration of St. Patrick's Day, Irish heritage, and the Mass itself, so it's a wonderful thing that we're able to come in here and celebrate," he said.

The Mass ended with a reception in the Cathedral Hall, complete with Irish soda bread, Irish music, and Irish step dancing.