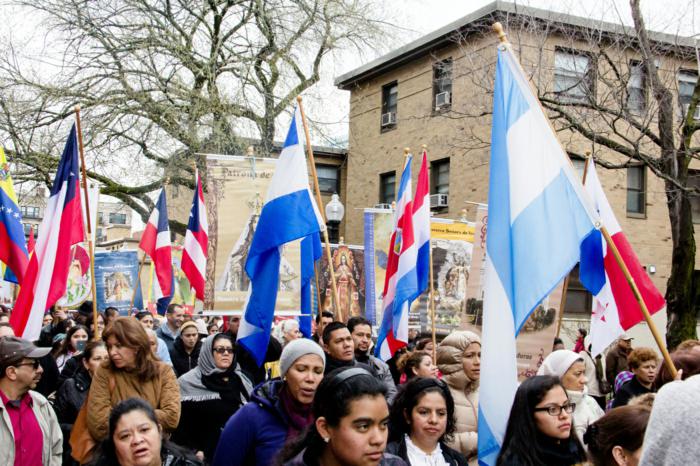 Members of over 40 ethnic communities of the Archdiocese of Boston took part in Walking for Mary, Year of Mercy pilgrimage to the Cathedral of the Holy Cross April 2. Pilot photo/Mark Labbe

SOUTH END -- A procession of an estimated 2,500 members of various ethnic communities in the Archdiocese of Boston, led Cardinal Seán P. O'Malley, exited the front doors of the Cathedral of the Holy Cross in Boston April 2 singing.

With police blocking off several nearby streets, the group walked a block around the cathedral, entering it again through the Holy Door of Mercy in a slow, halting procession. From beginning to end, the singing never appeared to stop.

The procession was part of the afternoon-long event Walking with Mary, planned by the Archdiocese of Boston's Office of Outreach and Cultural Diversity in an effort to bring the different ethnic communities in the archdiocese together to celebrate the Year of Mercy.

The event gathered parishioners representing about 40 different nations, many carrying banners, flags, and statues and images of their particular devotions to Mary, during the procession.

The event began in the early afternoon with a multilingual Chaplet of the Divine Mercy, followed by the procession.

Upon reentering the cathedral, each person was handed a white handkerchief, which they waved in the air as the procession, led by the Divine Mercy image and Cardinal O'Malley, moved through the center aisle towards the altar.

About 200 children processed after the cardinal, carrying flowers that they placed into baskets at the front of the cathedral.

Father Michael Harrington, director of the Office of Outreach and Cultural Diversity, read the parable of the Good Samaritan, which led into a keynote address from Cardinal O'Malley.

In his talk, the cardinal referenced the parable, saying that it highlights that Catholics should not only be merciful to their neighbors, but should also love them, and love God.

"Love with your whole heart, (Jesus) says, not only your God, but also your neighbor. In this Year of Mercy, the Lord is telling us to go and do likewise, to practice mercy," said Cardinal O'Malley.

"Love is not an obligation, it's a necessity to live. Without love, we die inside," he continued.

Cardinal O'Malley also noted the need for compassion, especially in this Year of Mercy.

"Compassion is not an instinct, compassion is a conquest. It means putting someone else's pain center stage, and forgetting about our own troubles," he said.

Cardinal O'Malley ended his remarks by leading the assembly in the Jubilee Prayer of Mercy.

The event concluded with a performance by 10 different ethnic choirs.

Leiri Bocanegra, of St. Mary Parish in Waltham, served as a volunteer at the event.

She told The Pilot she was impressed by the amount of people who attended the event.

"It's just unbelievable how many people come together from different parts of the world to just express their love for Jesus and (his) Mother," she said.

Father Harrington, speaking with The Pilot April 5, said that there is a potential for Walking with Mary to become an annual event.

"This was especially for the Year of Mercy, but a lot of ethnic leaders thought this would be the kind of event that could be done every year... Maybe we have started a tradition," he said.